We’re currently undergoing renovations at home, and I’ll hopefully end up with a dedicated studio space when it’s all done, but it is slowing me down a bit. Today I painted a lot, but it consisted of two coats of paint on a 40 square metre ceiling. Unfortunately I’m getting no opportunities to go out and paint landscapes.

Earlier this week I was going through some old artwork I’d uncovered so I thought I’d share that, just to keep my “weekly” blog moving.

The first of these dates back to the mid-eighties when I was a signwriter. With my background in airbrush art, I was often given jobs that involved detailed or lifelike illustrations. This beer bottle was painted in lacquer on white acrylic sheet (perspex). It was one of four that I painted side-by-side and stands around 1.2m (4ft) high.

Acrylic sheet comes with an adhesive protective sheet which peels off easily. I used this for a lot of the masking work. All paint was applied with spray guns and airbrush. 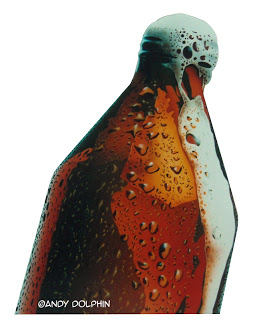 The second one comes from the early nineties, after I’d jumped ship into the world of advertising and commercial illustration.

I did a series of concept paintings for Austal Ships in Western Australia. This was in the days when computer graphics were still incredibly expensive, so illustration made sense. I worked from preliminary plans to produce the 3D image and once this was approved by the designers, I’d draw it up about 50-60cm wide, transfer a faint image to illustration board, mask it with “frisk” film then break out the inks and airbrush ready to colour it.

This one uses a photo of the ocean as a base. The boat was airbrushed on the illustration board then it was cut out and the surface layer of the board peeled off (I always hated that part). This cut-out was stuck on the photo with double-sided tape and was then photographed and printed. This print was retouched before being sent off to a commercial printer for reproductions.

I loved these concept-art jobs but I know so much more about light and shadow these days that I would do them very differently if I had to do them all again. 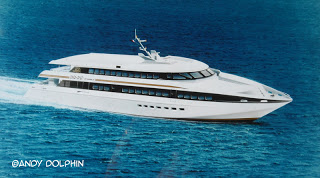 The next one, probably from the early-mid nineties, is perhaps my first real painting done for no reason other than the fact I wanted to do it. Prior to this, almost all the art I’d produced as an adult had a commercial purpose.

One day I walked past a travel agency and saw a brochure with a man skiing on the cover. For whatever reason, possibly insanity, I immediately imagined the man as a kangaroo. I grabbed a copy of the brochure and some others for extra reference and soon went to work with tube acrylics and gouache on a canvas board. 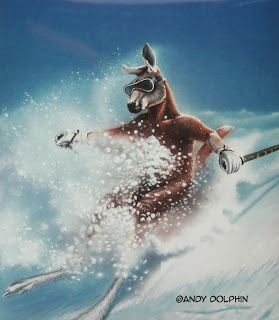 I didn’t really know what I was doing but I was having fun at least. I think I painted that roo hair-for-hair!