I’ve uploaded a new video but it’s a slight departure from my oil painting videos.

Actually, it’s not much related to painting at all. 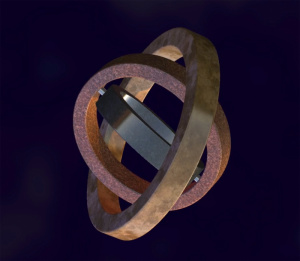 Those who’ve known me for a while will be aware of my long interest in video graphics and animation. I’ve recently obtained a “new” (less-old) computer and purchased Apple Motion video effects software. So I’ve been doing some investigating and learning.

Today, I decided to see what I could do using some of its 3D capabilities. Although Motion 5 doesn’t natively support 3D objects (there are plug-ins, I believe), I did manage to make a gimbal using only Motion 5 tools.

Gimbals fascinate me as they spin in sometimes-unexpected ways, although the motion is uniform and each ring never actually changes direction or speed. This video does include a few camera moves in the second half, and this adds to the awkwardness of the motion.

It’s pretty geeky stuff, but take a look at my Youtube channel if you’re interested is that sort of thing.