And now for something completely different…

I rarely do paintings of buildings that aren’t in a state of ruin. I love rusty old sheds that look like they’ll fall over in the next strong wind but I generally steer clear of solid buildings.

I was driving around town on Monday evening and noticed the strong, warm light of the setting sun lighting up the Mt Barker railway building. The station was glowing! Yes it was a solid building with no rust in sight but in a painting like this the building isn’t as important as the abstract patterns of tones and temperatures and that’s what I wanted to focus on.

As usual at this time of day, I was going to be pushed for time before the sun set. 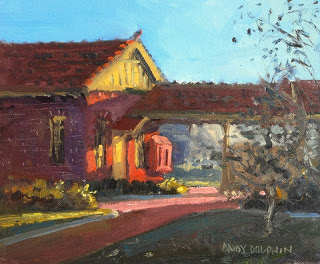 I was especially captivated by the interplay of warm and cool reds so that was where I started (I wanted to say “the juxtaposition of warm and cool” because that makes any critique so much more “arty”, but I’ll avoid it for now). I quickly laid out the main outline shapes then worked on the sunlit face, trying to get the tonal balance correct here. Then I worked out from here, filling in the shaded roofs, walls, lawn, path and shrubbery. The sky, a hint of background buildings and a few flicks of the foreground trees were the last thing I added on site. By now the sun had gone but I wasn’t finished – I was missing some of the sunlit areas.

Luckily I had taken a photo of the scene before I started so once I was home I brought the image up on the digital camera screen and used that to add some final details. I hadn’t added that strip of sunlight on the floor so the photo was invaluable for placing this correctly. The photo also helped to clarify a couple of confusing shadows that had shifted quite a bit as I was painting so a couple of touch ups and I was done for this sketch.

This painting was done on a canvas panel. I’ve made a few of these up by gluing pre-primed cotton canvas to my pre-cut MDF boards. I used white PVA glue and finished the canvas with a fresh coat of acrylic gesso.

Next time we have a good clear evening sky, I think I’m going to give this location another go – but starting just a little earlier.

The station is no longer used for its original purpose. Restored in 1997, the main building now houses perhaps the best tourist information centre in Western Australia. The railway itself still operates but only for long, heavy haulage trains that pass through without stopping, on their way to deliver grain to Albany Port.