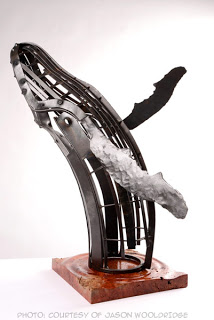 The saga surrounding the controversial decision not to award a prize in the 3D category of the Great Southern Art Award continues.

Two artists with entries in that category have spoken out publicly. One of them has withdrawn his entry from the exhibition in protest, three weeks before the exhibition closes.

In a comment on Facebook, sculptor Jason Wooldridge wrote “I was insulted personally but also felt it was an affront to all applicants. The organisers had not considered the possible damage to the reputation of artists who are trying to make a way in this fickle business, a business that is hard enough already without ‘experts’ telling the public that your work is no good.”

On his decision to withdraw his magnificent whale sculpture from the exhibition, Jason added “I had asked them just to withdraw it from sale, but they dug their heels in and said that I would have to remove it….so i did.”

Seemingly confirming my suspicion that controversy does not attract artists to competitions, local sculptor Melaine McQuillan wrote “Apparently the judge thought that not awarding the prize would ‘encourage a broader approach’ what a laugh! I used to be a regular entrant.. I guess I need say no more.”

I have avoided the Albany exhibition myself for the last few years – partly due to lighting issues in the old venue (my paintings do not mix with mercury vapour lamps) and partly due to the controversial history of the event. I have sent my works over 200km to a different exhibition instead. With a much better venue for this year’s exhibition, I decided to give it another go but I may rethink that decision next year if controversy remains the order of the day.

As an aside, here’s an example of the work produced by one of the judges, Philip Gamblen, apparently the person who ultimately made the decision to award no 3D prize. (the picture is from pica.org.au and is reproduced here for purposes of critique and commentary) 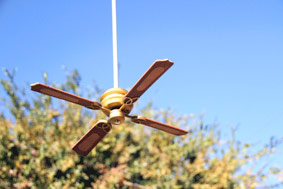 In a wonderful example of art speak, the comment accompanying the above image is…

“Thermal Lift is a scaled down miniature domestic ceiling fan, activated by a hand-crank. Like much of is [sic] work, this piece which is suspended just above head-height, creates a sensorial response to both architectural spaces and the natural environment in which we live.”

I’m sure it does – although, from the photo, it looks like it’s just a small ceiling fan hanging outdoors. I guess it’s a case of “juxtaposition“.

What’s flabbergasting to me is that the person who produces and sells something like this as art, and perhaps it is since a photo tells us little, cannot find a prize-worthy entry among any of the quality pieces on exhibit in Albany right now.

I believe the organisers should think more carefully about their choice of judges next year and decide if they want controversy or credibility. If they want the exhibition to be respected, they have to show some respect to artists who make the exhibition. Without them, it’s nothing.

Controversy, in my opinion, is not a winning formula.