Peaches and cream with John Wilson

John Wilson is an artist with a worldwide reputation. Based in the Blue Mountains, a couple of hours drive from Sydney, John has built a career on capturing the region in oil paint and last month I was lucky enough to find a spot in one of his 10-day masterclass workshops.

It was an amazing experience as John gave students his recipe for “peaches and cream” and “apricot” and explained his use of foundational warm and cool greys. No questions went unanswered as John shared the knowledge borne from of his years of professional experience.

Of the 10 days, three involved painting en plein air in some of the most beautiful places on earth. We painted from the Megalong Valley to the Capertee Valley and it was easy to see why so many artists are drawn to the region.

I ventured out on my own, before and after class every day and on the weekend in the middle of the course, snapping hundreds of photos. I also managed to do a few of my own paintings on the edge of the Katoomba cliffs.

One of my more-successful attempts was painted one morning from a cliff face not far from the Sky Rider motel where I stayed. 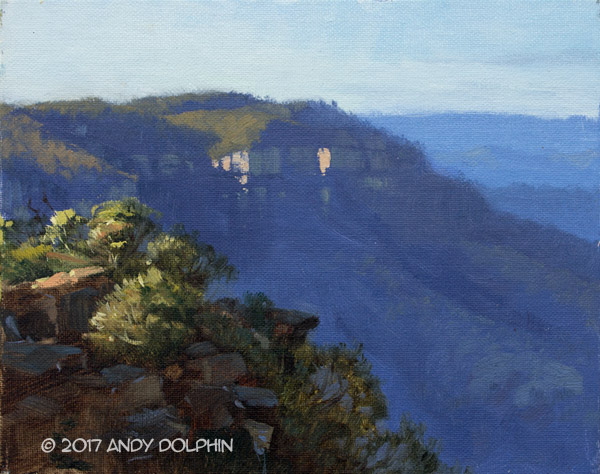 One thing you quickly learn here is to pay attention at the start and to cement the image in your mind because the light can change dramatically even in the short time it takes to do a small painting like this one.

And here is the “proof I really was there” photo. 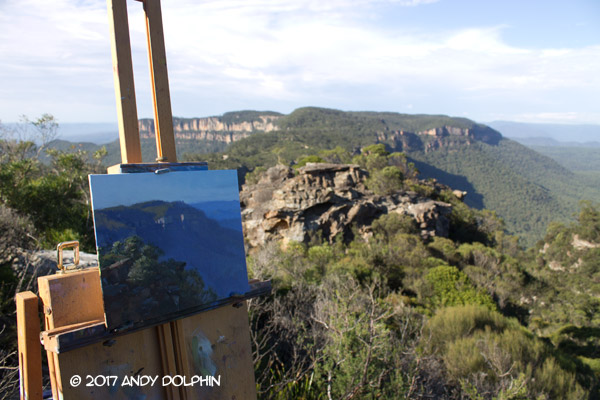 As you can see in this photo, the dramatic shadow cast by the distant mountains in my painting was almost completely gone by the time I put down my brushes, less than one hour after I began.

One evening I went to a small lookout just before sunset and decided to challenge myself to see just how fast I could paint something.

I set about capturing the Three Sisters, arguably Katoomba’s single-biggest natural attraction, as the light shifted rapidly with massive thunderhead clouds building all around and changing from bright fluffy white to rich, deep shades of orange and purple.

The final painting took about 30 minutes, after which there was no sunlight on the cliffs and it was too dark to tell what colours I was mixing. 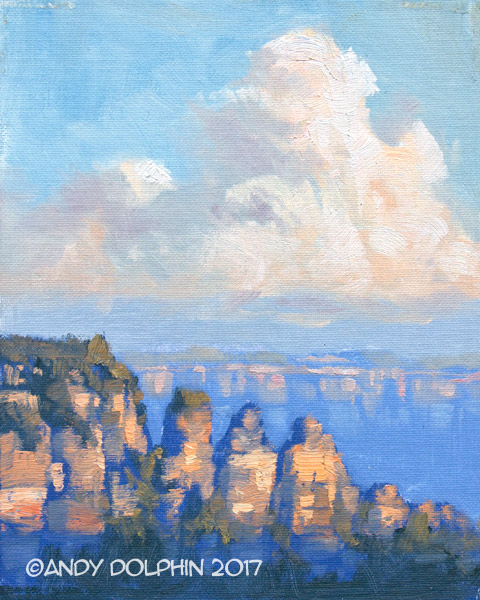 As a painting, it leaves a little to be desired but as an exercise, I absolutely love it.

Thanks John and Cecelia, and everyone who attended the workshop, for an inspirational two weeks with some great people. I hope to do it again soon. 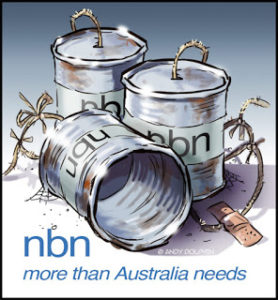 My apologies for all the political cartoons lately. If you’re not into politics, then please bear with me while I get this out of my system.

It has been announced this week that our already-slow NBN is to be scaled back even further. This is apparently because, at a time when the rest of the world – even New Zealand!!! – is moving toward download speeds of 100Mbps (megabits per second) and higher, Australia, we are told, doesn’t even need 25Mbps.

As the Census fiasco rolls on… 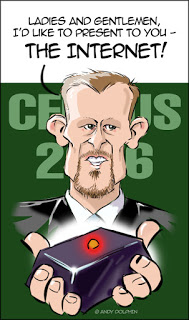 And with somewhere less than half the expected Census forms submitted a week after Census “Night”, the saga seems set to continue for quite a while yet…

Hopefully I won’t have to make too many more of these things (though there are more in my head). 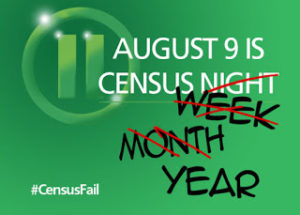 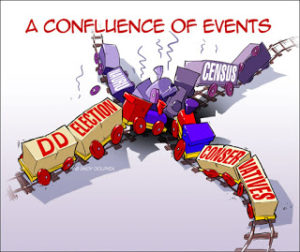 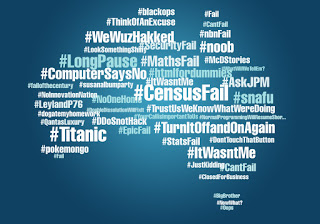 Recently I’ve been learning a little about how to predict snow falls, especially in southern WA.

Snow is almost unheard of in this state but at 1095m above sea level, Bluff Knoll does enjoy a some light falls a few times a year.

I had been watching the weather charts all week and it was looking good for today and tomorrow. When I checked today’s forecast this morning, it had possible snow drifts predicted for the Stirling Range this afternoon and evening.

My wife and I headed out to Bluff Knoll around 3pm. The sun was shining, the wind was light and there were clouds drifting across the top of Bluff Knoll. There was a definite chill in the air, but it was beautiful and serene.

I set my DSLR camera up on a tripod right next to my car so I could sit in relative warmth. I attached a timer cable and when I was done taking a few test shots, I looked up and there no more sunlight anywhere.

I set the timer to take one picture every five seconds and left it to shoot until the memory card was full.

Janet had “gone for a walk” and sent me a text message warning of some approaching dark clouds. The storm was soon with me and it hit with a vengeance. I was busy trying to tie the tripod down so it wouldn’t blow over, as sleet whipped past me, piling up on the back window of the car, and soaking through my jacket and jeans.

Janet was “somewhere” on the walk trail, sheltering beside trees and basically getting soaked. She had a great time watching flurries of snow.

While I could only describe the weather I witnessed in the car park as “sleet” rather than “snow”, there were people on top of the mountain and they most definitely enjoyed the real thing, even if it did arrive horizontally and and great speed. We met the brave souls before we packed up and they showed us photos of the snow on the ground. There was enough to make some snow balls.

The worst of the blizzard lasted around 15 minutes and quickly cleared. Soon after, the setting sun cast a warm glow over everything before ducking behind a cloud. Day soon turned to night, the camera’s memory card was full and we packed up, dried ourselves off, chucked the heater on in the car and headed home.

Over 1 hour, 40 minutes the camera took just over 1500 photos. I used the images to create a one minute time-lapse video. 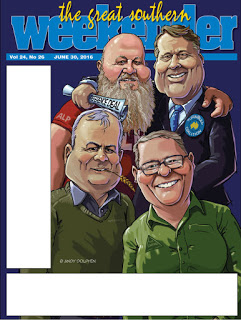