The year was 1999 and at a tender 38 years of age, I joined the Bayswater Art Society. Since the early ’80s, I’d worked as an airbrush artist decorating custom painted vehicles, an illustrative signwriter painting massive murals on city buildings and billboards and later, through to the late ’90s, as a graphic artist and illustrator. In all that time I never really tried my hand at painting for painting’s sake, it was always a commercial enterprise where the client dictated the subject.

I still recall the night I went along to my first art society meeting. I sat outside in my car, watching people arrive as I tried to decide if this was for me (I don’t like change, and this was something new). Eventually I convinced myself I had to see what it was about and I ventured inside. I was warmly welcomed by the members and thoroughly enjoyed the night, which included a demonstration by a practising artist.

I also met Derna Johnson, a wonderful artist especially renowned for her paintings of fairy wrens and poppies and a pocket rocket of a lady who soon took me under her wing and guided me through the Western Australian art scene. In my early fine art days, she would critique my paintings for me and it was always valuable advice. As I began to develop my own style, Derna steered me toward worthwhile exhibitions and galleries. She also introduced me to the WA Society of Arts where I met more amazing artists. Before I knew it, I was being invited to stand in front of the membership of both societies and demonstrate my skills! I hadn’t envisaged any of this just a few years earlier when I tossed up if fine art was for me or not.

I owe a huge part of my subsequent art success to Derna’s inspiration, encouragement and guidance.

When I left Perth in 2003, Derna had just taken on a project for the City of Bayswater to turn historic Ellis House into an art centre. I doubt anyone at the council could have foreseen what lay in store but they were in for a treat. Derna is visionary and doesn’t do things by halves.

Built in the early 1900’s, Ellis House is located near the Swan River at 116 Milne Street, Bayswater. It was the first dairy farm in the Bayswater district but by the mid 1990’s it had  fallen to neglect and vandalism. In 1995 it was refurbished by the City of Bayswater and later they publicly invited ideas for future use.

My wife Janet and I dropped in to see Derna and a few of my old art friends during a trip to Perth a few months ago and it was clear that she and her band of volunteers have created an icon, a paradise. Ellis House today is a thriving art centre with ongoing exhibitions and a growing membership of artists and friends. It is an eastern suburbs hub for artists and art lovers and just a delightful place to spend time. If you’re in the area, or have the time to get there, go and take a look, you’ll be glad you did. 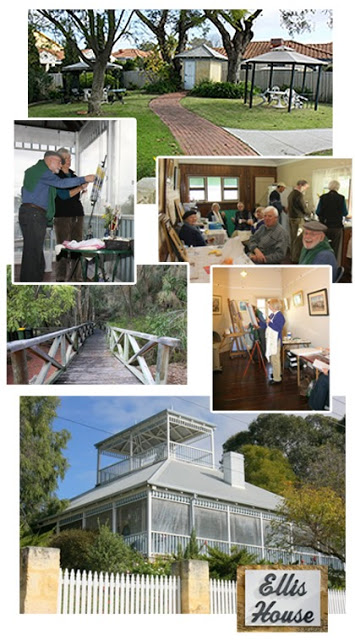 Earlier this week I received a couple of emails from Derna and discovered that she’s been undergoing chemotherapy. My heart sank but in typical Derna style, this was an enthusiastic message of her good health and projects she’s taken on to help other cancer sufferers. Derna always knows how to make lemonade out of lemons.

I called and asked her if she could have a chat with her doctor and get him to extract just a little of her drive and enthusiasm, then bottle it and market it. I want to be first in line.

One of Derna’s projects is a list of tips for chemo patients, drawn from her own experiences of learning the hard way. I’ve asked her if I can share it with my readers and hope to put it here soon, once she’s ready for it to go public. I don’t think she’ll mind if I share the first and possibly most important tip with you now though:

“Trust your doctor and his medical team, they know far more than we do, a whole lot more!”

Thanks Derna. Look forward to seeing you again soon!