With counting from last weekend’s election continuing in our electorate of O’Connor, I scored the front page of the Great Southern Weekender today.

With the retirement of single-term politician Tony Crook, who wrestled the seat from long-time MP Wilson Tuckey in 2010, the contest this year was between two political newcomers.

Chub Witham stood for the Nationals and Rick Wilson for the Liberals. Eleven Candidates ran in the seat this year but Witham and Wilson were the only candidates who stood any realistic chance of winning. And now it’s down to the wire, although it seems likely the Liberals will take back the seat they held for decades.

Anyway, I sat up late for two nights this week and came up with this… 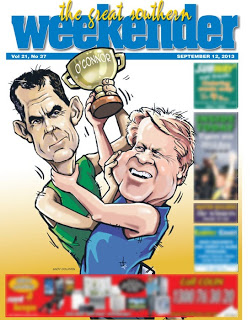 On the first evening, I focussed on doing a caricature of Rick Wilson, as he appeared to be the more-difficult of the pair to capture. At that point, I had no idea what the theme of the finished illustration would be, or who would even need to be in it as it was possible the situation could change before deadline. So this first caricature was mostly an exercise in getting a likeness, just in case (note, if you search for him, he doesn’t look much like his red-haired campaign photo in real life). 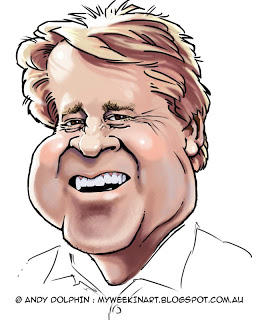 As it turned out, I had to simplify this drawing the following evening, when I drew Witham and completed the piece, as I wouldn’t have had time to do the whole illustration to this level of finish. So I did the Chub Witham face, simplified this one and then plonked them together on a page and drew the bodies around them, using a front-page template as a guide.

Once I had the contest theme worked out, I had to change Wilson’s happy expression to suit.

I am Production Manager at the Weekender, by the way.