When I’m not painting or blogging, I am the production manager at the Albany & Great Southern Weekender newspaper. Today, one of my caricatures adorned the front page. 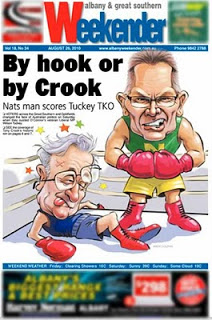 Wilson Tuckey had been the political representative for the federal seat of O’Connor for thirty years. It was considered one of the safest seats in Australia until boundary changes were made prior to last week’s election. As a result of those changes, The Nationals’ Tony Crook became a legitimate contender for the seat. Following a notable pre-election battle, Crook eventually won the seat after preferences were distributed.

As with my other caricatures, this one was done in Photoshop CS using a Wacom Graphire4 tablet & stylus. With relatively short notice, and with Mr Crook not previously being a well-known face, I’m really pleased with the way this one turned out.