Thursday started out a little cloudy but by midday there was barely a cloud to be seen. It was also setting up to be a warm autumn afternoon so I threw the gear in the van and headed north toward the Stirling Range, the only thing in WA that looks like a stereotypical mountain range and home to Bluff Knoll, the highest peak in the southern half of the state. 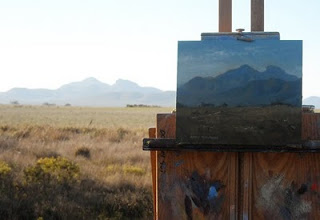 At about 2:30pm, after lots of stops to check views and take photos, I happened upon this spot. It’s not the most spectacular view but there was a shady spot off the quiet road where I cold stand comfortably and I wanted to experiment with a limited palette so I wasn’t too fussed about finding “that perfect composition”. I wanted something simple.

Burnt sienna was going to have to act as my “red” and Australian red gold as my yellow. As strange as the choice of colours might seem, I did consider the scene before me when making my selection. There were no strong, saturated colours. It actually worked pretty well, all things considered.

I must confess to scraping the top half of the painting when I got home, and repainting the sky and mountains a little lighter than I had on site. It happens like that sometimes. But I stuck with the same three colours. 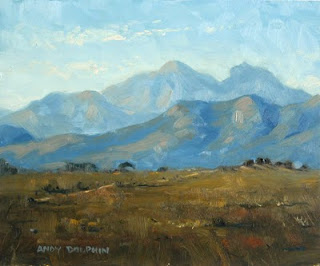 This part of the Stirling Range is known locally as The Sleeping Lady, but only when viewed from roughly this angle. If I’ve captured it right, you should be able to see how it got that name.

I had a lot of trouble taking the photo of this painting. No matter what I did I got reflections. Sorry.

When I was done, I continued heading north-east, roughly parallel to the range. By now the sun was getting lower and things were looking more interesting. I found my second painting waiting for me a few kilometres up the road. 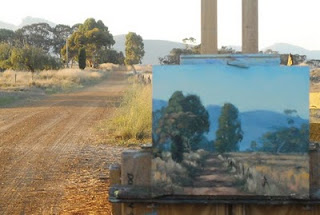 I also used a limited palette on this painting but I added cadmium scarlet since the sunlight was going to warm things up quite a bit. So I had French ultramarine, burnt sienna, Australian red gold and cadmium scarlet, plus titanium white. 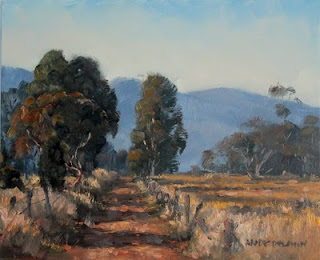 As predicted, the sunlight was warm and became warmer as I painted. I had a small battle deciding whether to keep adding warmth to the painting until I reached a point where I couldn’t go any warmer without re-painting the sky and distant mountains.

The limited palette has its benefits and drawbacks. On the plus side, it cuts down on dithering over which colours to mix which helps to move things along a little faster. The aim is not so much to match exactly what you see but to focus more on tonal variations and warm versus cool. The limited palette also results in a more cohesive painting where all colours in the finished painting share common ancestors.

The downside is that some colours that might look important in the scene, such as warm, glowing highlights, might be impossible to mix even closely from the colours on your palette.

So if you’re a colourist a limited palette might drive you nuts but if you’re a tonalist it can be a joy. I’m usually somewhere between the two as I do aim for strong tonal contrasts but love to push saturated colours in sunlit areas. But the limited palette method will definitely be getting a workout from time to time in my plein air work.