It’s taken almost three years to make a decision but I finally bought myself a new digital camera.

My first digital camera, purchased almost ten years ago, was a 4MP Nikon 4300 Coolpix. It was expensive at the time but I loved it to bits. The picture quality was astonishing, even by current standards in my opinion, and it had plenty of manual controls so I could override the auto functions when necessary. But it eventually started playing up (I did tend to drop it a lot) so I had to retire it.

Then I needed a camera to take away on a trip and I had to make a quick decision, so I naturally went with Nikon again. This time it was a cheap and simple L18 Coolpix. At 8MP I’d expected better results than I was used to with its 4MP cousin, but it wasn’t to be. I’ve had it for almost three years and never really been happy with it. The images just never felt “right” and, frankly, didn’t seem to me to be as sharp or detailed as the lower-resolution images from the 4300.

So I’ve been watching camera prices – and reading reviews – for a while until finally, this week, I saw a Canon 1100D SLR on sale for under $400. I wasn’t really after a DSLR but I’d never seen them this cheap before so it was hard to pass up. 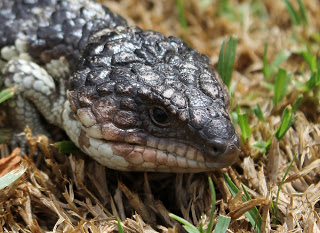 This little guy is a Bobtail Skink and was wandering across our back lawn this afternoon. Much more acceptable than the tiger snakes we’ve had hanging around for the two previous summers.

For those who are fascinated by such things, the photo was taken with the standard 18-55mm lens at full zoom, auto-focus, with the camera on macro setting. I was about 30-40cm away. I’ve cropped this section because the full image is a 4.5MB file.

I just love the detail.

So in future, when I mention that the photos of the paintings that I post here aren’t up to scratch, you can blame the photographer (me), not the camera.