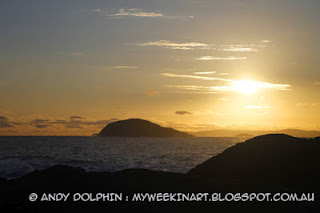 There were large cumulus clouds building at home but I wanted to return to the bay where I painted yesterday and Thursday. I made the 60km (that’s one-way), 45-minute trip to the coast around 3:30pm and when I arrived, the sky was clear – not a cloud to be seen.

I started painting later than usual today because I hoped to capture some of the warm evening light I’d seen as I was packing up yesterday. This takes a bit of planning and some assumption because the really warm light only lasts for about 10-15 minutes, at best, and that’s not nearly long enough time to complete a half-decent seascape painting.

I added cadmium scarlet to my palette, along with ultramarine, burnt sienna, cadmium yellow light and a touch of viridian.

The cadmium scarlet found its way into most colour mixes, especially the misty background, but its major role was in the highlights, ensuring these would take on a warm, orange-red glow. I was careful to keep the viridian out of anywhere it wasn’t needed. 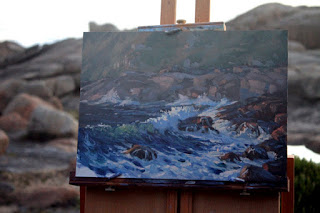