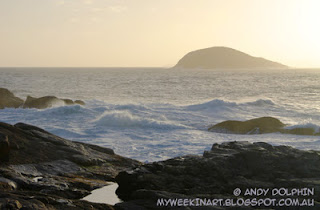 With the stormy weather behind us, I returned to Torndirrup National Park on a rather sunny Friday afternoon. It was good to see that, despite the beautifully clear weather, there was still a good swell sending large waves into shore.

I set up in the same spot I’d been a few days earlier, when I painted my last plein air seascape. Friday was a similar day to last Sunday, except there were no clouds at all. The light was strong and there was a fairly thick haze which dropped the value of the distant ocean to the point where the horizon line was barely discernible early on (I visited there again yesterday evening and the haze was more incredible). 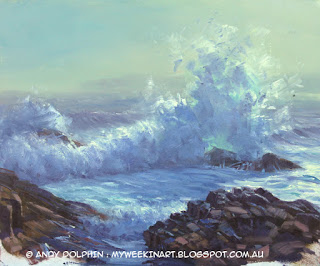 Standing in the same spot as before, and looking in the same direction, I naturally ended up with a very similar painting. But this time the light shining through the splash of the big waves was very evident so I chose to exploit that more than before.

I also focussed a bit more attention on the foreground rocks and chose not to cover them in water as I had last time. This leaves them looking like big lumps at the bottom of the picture but these are just studies, not finished paintings, so I’m not too concerned about that.

When I got back to the studio, I assessed my effort and felt I’d lost too much of the light in the splash and that the middle-ground was lacking energy.  I spent about 15-20 minutes touching things up with the paint that was still on my palette. While I was at it, I modelled the rocks a little more by throwing a little more light on the upper faces. 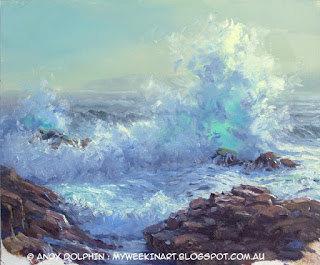 Ultimately, I’ll borrow elements from several of my recent plein air sketches and create one large painting that is true to the location but which, hopefully, also has a good solid design. For now I’m enjoying the experience of visiting the same place in different conditions and seeing what I can capture in paint while I’m there.

Next time I hope to pay more attention to the part of the wave to the left of the exploding foam and see if I can work out what on Earth is going on back there. I know it always seems chaotic.