I was invited to this year’s first Porongurup art picnic yesterday and decided, this time, I’d do a painting rather than sketches.

We met at the old Woogenellup bridge and I wandered around for half an hour or more looking for something to catch my eye. It’s a very interesting place with the abandoned timber bridge sitting alongside a concrete river crossing and culvert. The bridge itself is slowly returning to nature as the timbers rot and grasses and saplings take hold. Much of the area immediately surrounding the bridge is overgrown with grass and scrub.

I chose a spot at one end of the bridge where the post-and-rail fencing ends atop a grassy ridge. The evening sun was shining through at a sharp angle offering interesting contrasts of warm and cool tones.

The colour of the light changed dramatically during the forty minutes or so of painting time and I battled to decide which colours to follow and which to ignore. I ened up with this… 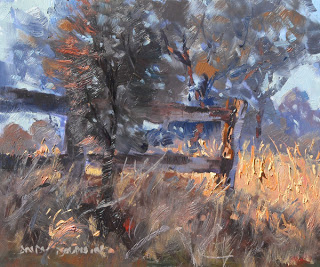 I didn’t mind it as an on-site exercise but it lacked punch, largely due to my colours drifting too much toward greys. There was no sunlight shining on the fence or grass by the time I was finishing.

I reviewed the painting this morning and decided to try and give it a lift. Step one was to scrape it back with a palette knife… 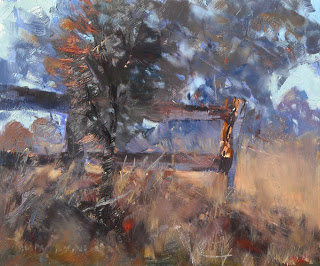 Scraping back an oil painting leaves a clear image in thin, smooth paint.

I reworked almost every part of the under-painting as I wanted to soften the background tones, pushing them back in the process, and strengthen the foreground. Here’s where I ended up… 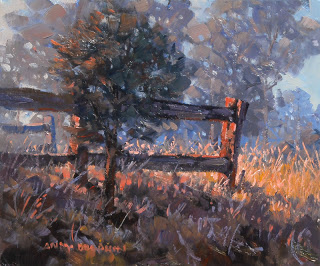 It’s still a fairly loose study but the finished painting has much-improved tonal contrast, helping the fence stand forward from the distant trees. There is also a more distinct warm-cool contrast between foreground and background.

I also added in a post on the far side of the track. I’d noticed this as I was finishing the original but I was too busy to add it in. It’s barely noticeable but adds some dimension to the timber structure.

This was an unusual subject for me as I most-often seek out wide vistas, but I enjoyed the challenge.