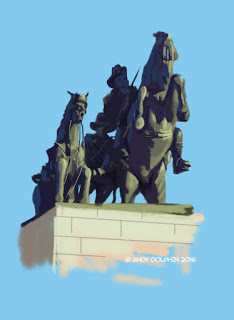 Ever since getting my hands on Procreate, a very cheap “finger-painting” app for the iPad, I’ve wanted to sit down outdoors and have a go at digital plein air painting.

I’ve made a few attempts at it recently, with less-than-spectacular results, but on Wednesday afternoon I ventured up the steps to the Anzac Memorial atop Mt Clarence in Albany and sat myself down to do a painting I’ve long-wanted to do in oils, but never got around to.

The afternoon was bright and sunny with clear deep-blue skies. It was exactly the sort of light I enjoy painting in because it delivers sharp contrasts on the subject. It works especially well with statues, a subject I’ve largely ignored in my 17 years of painting, and can create a beautiful, natural notan effect.

Using a cheap pen-stylus I sketched on the iPad for just over an hour and produced something I was happy with.

In doing this, I discovered that painting on a glossy screen on a sunlit afternoon is no easy task. I had to keep turning away from the subject to cast a shadow across the iPad, and then tilt it in various directions to reduce the reflections. After applying a few strokes, I’d turn back toward the subject then repeat the process with each new piece of information. This was made more awkward by a bright white flag pole which had positioned itself rather inconveniently between me and the subject. 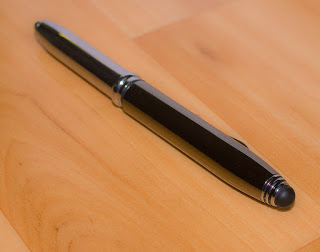 This painting could have been completed using only a finger as a brush, but I used a combination pen/stylus/torch which I got as a free gift with something I had mail-ordered. The pen features a soft “rubber” tip on one end to use as a substitute finger.

Touch screens like those used on the iPad, usually work by sensing tiny electrical impulses from the skin. In order to act as a substitute finger, a typical touch-screen stylus is made from materials that will conduct electrical charges from the hand to the writing tip.

There are better stylus options around than the one I’ve used here but, as with most things in life, you get what you pay for and the better ones cost real money which I’m not yet ready to spend.

Procreate offers the facility to work in layers so I begin with a rough outline which becomes the top layer for a while. Next I build areas of colour delineating light and shadow on a layer beneath the outline. With the tonal map roughed in, I hide the outline layer then build mid-tones and detail on two or three new layers above the tonal layer.

From here, there’s a fair bit of back and forth, working in each layer adding and subtracting colour as needed to tidy up the outline and refine details. 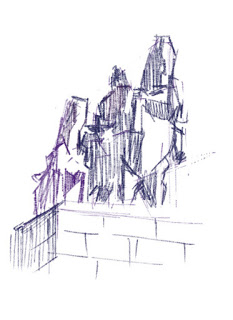 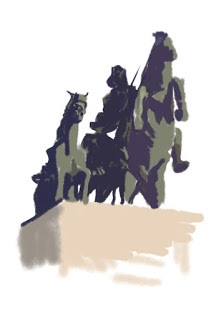 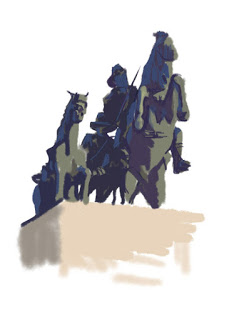 The Procreate app usually records every brush stroke and saves a time-lapse video of the painting’s progress, but I discovered with this painting that the video is lost if you shut the iPad down without first closing the image and returning to the Procreate gallery. As a result, I don’t have anything to show except the final image and the layers I used to build it.

Hopefully this is the start of a new sketching routine for me. I think exercises like this could easily form the basis of a traditional painting.