Sometimes, despite best efforts, some paintings just don’t work. With plein air paintings, the chances of “failure” are much higher as paintings are executed quickly in changing light conditions.

I have quite a collection of paintings that I don’t let out in public. Every once in a while, I review them and see if I can recover the feeling that made me want to paint them in the first place.

Here are two such paintings, although you only get to see “the after shots”. 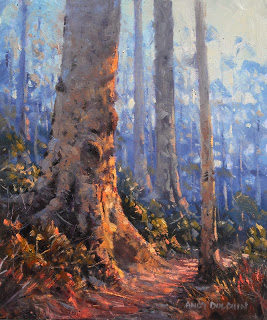 This small painting was done in the studio but executed quickly, like a plein air painting. It is based on a piece I did a few years ago. The original lacked a significant warm-cool contrast and therefore failed to portray much depth or the warmth of the sunlight. This little painting was done with a view to doing a larger piece. 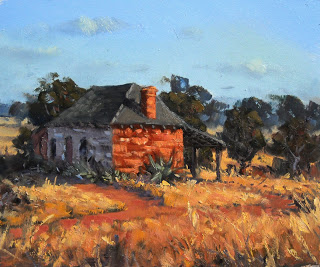 This was a little plein air painting I did back in March of the historic Mount Pleasant Inn kitchen at Arthur River.

When I first painted it, the sun disappeared for quite a while and I lost the light that had initially attracted me. As a result, all my tones drifted toward the centre and the painting lacked punch.

Last week I took another look at it and increased the contrast on the building, darkening the shadow side and boosting some of the intense light on the red brick wall. This instantly lifted it so I continued on, making the front row of trees darker to bring them forward from the distant trees. A bit of warm colour was added to the dry foreground grasses and it was saved.

In this case, I painted right over the original because the foundations were okay. It’s a risk, because it could all go wrong then you’ve lost the lot, but it is a huge time saver. This one too might be used as the basis for a larger painting. There are a few exhibitions coming up and I need some paintings bigger than 20x24cm.