Serendipity means “happy accident”. In short, it’s when something good happens as an apparent result of something not going to plan. You might also call it luck but serendipity is far more poetic.

I’m no great believer in mysterious universal forces guiding me through life, but this week I enjoyed a serendipitous experience of my own.

I headed into “downtown” Albany and went for a walk along the main street. Before long I found myself at the local auction house. I’d never ventured inside before but I had nothing better to do so I wandered in and had a look around.

Within minutes I spotted some Walter T Foster art instruction books. It was a fair stack, maybe eight books or more, and included some interesting titles including Clowns & Characters, by Leon Franks; an exquisite looking book. There were a couple of seascape books, one on pin-up art and a few more-general titles. Several of them were in serious need of TLC as the covers were completely separated. One had no cover that I could see.

I have a soft spot for Walter T Foster books, as they played a large part in my childhood pursuit of art, so I quite liked the idea of adding these to my small collection. I made a mental note to return on auction day and see if I could pick them up cheap.

Then I spotted it… sitting there staring up at me… I couldn’t believe my eyes. Had serendipity struck?

But first, a short back-story.

I discovered Richard Schmid when I bought some secondhand International Artist magazines almost 15 years ago that featured some of his work plus a small step-by-step demonstration piece. I was immediately attracted to his semi-abstract approach to painting. I loved it.

I found a one of his books on landscape painting listed on the state library database and put in a loan request. I waited for the call to say the book was available but it turned out to be lost in the system somewhere.

I tried again a few years later, after seeing more of Schmid’s work on the internet, but the book still could not be found. It has since been removed from the Library database.

But there I stood, two days ago, in one of the most remote cities in the world, a virtual outpost, a tourist city with a population of less than 35,000 people – and Richard Schmid’s landscape book was lying there in front of me.

I went along and waited patiently as the auctioneers worked their way through a list of over 1000 items. I think the sets of books I was interested were listed at item numbers 998 and 999. At least, it felt that way.

Finally the moment arrived. I knew what I wanted to spend, and I knew what the Schmid book was worth on Ebay – and there was a big gap between those two figures. Even secondhand copies in average condition command a premium price.

The Foster books were up first and the auctioneer’s assistant shouted out an an absentee bid right up front that was almost double the figure I had in my head. I didn’t even get a bid in. Somebody wanted them more than me, and that’s great. They still got them at a terrific price, albeit more than I wanted to spend.

And now it was time. A little stack of three art books was next on the list. “Richard Schmid Paints Landscapes” was one of them.

I won with one bid. For $10 I got the book I’ve wanted to read for years – and two bonus books. I don’t even care about it’s resale value. I would have paid $10 even if I knew it was worth that, or less, on Ebay.

The dust jacket on Schmid is a little the worse for wear but the book itself is in terrific condition.

So here it is, dear reader, my serendipitous moment in picture form… 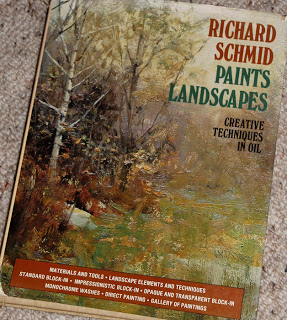 I no longer have to hope the state library will find their missing copy and remember that I requested it. I no longer have to borrow it from anyone. I own it now, and all because my framer wasn’t open when I went to pick up my latest order.

Now excuse me, I’ve got some reading to catch up on.