Shelley Beach sits at the edge of West Cape Howe, the most-southern point in WA. It’s an isolated beach surrounded by steep hills and is a favoured spot for parasailing, with two launch pads located on one of the hilltops.

I headed out there yesterday evening in the hope of capturing a nice sunset painting. When I arrived, there was a thunder storm heading in from the west, over the hills. I ventured down to the carpark by the beach and pondered the possibilities. Everything was grey and there didn’t seem to be much chance of painting.

Just before I went to leave, I noticed one big sunlit cloud in the east. I didn’t have my camera with me, and it was too late to go anywhere else to paint, so I decided to just do a quick cloud study. 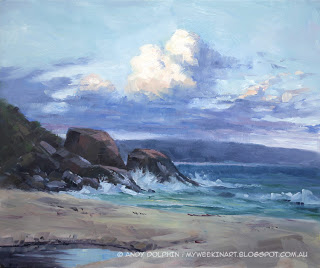 It was clear the cloud wasn’t going to be sunlit for very long so I drew in the rough shape and quickly applied a purply-blue to the shaded areas, leaving the sunlit portion white.

Next I mixed up the sky blue and quickly painted this around the cloud. Precision wasn’t important – there was no time for fluffing around. Behind me, the thunder was still closing in and the sky took on an amazing glow over the hills. I almost stopped what I was doing and considered painting the view to the west but decided to keep going.

By now, there was no sunlight on the feature cloud so I decided to lay in a bit of the land and sea, for context. Before I knew it, I’d almost painted a complete seascape – and it wasn’t looking too bad at all. The thunderstorm was now starting to come around the headland behind me and I kept seeing flashes of lightning in the corner of my eye. There were a couple of good flashes above me too, with loud claps of thunder. I expected to get drenched any minute.

With the rocks, ocean and beach laid in, I went back and added the sunlight to the cloud. Then I flicked a few touches of colour around the rest of the painting.

It was quite dark by the time I put the brushes down. The rain pretty much held off until I was back in the car and heading home, with lightning all around.

I did a bit of tidying up on the painting back in the studio.