Sorry, I got distracted by snakes and lizards on my last article. This time I’ll stick with painting, I promise.

This spot is between Mount Barker and Porongurup and is a dry creek bed for most of the year. Here it passes through a culvert under the gravel road. 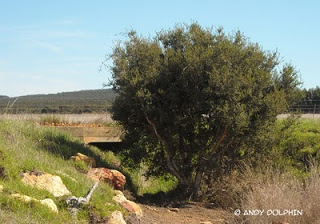 I parked the van off the road – because there was room for a change – and set myself up in the creek bed. I was particularly interested in the dark shape formed by the shadow on the tree and cast on the grassy bank to the left. The culvert “tunnel” added interest.

It was around 1pm, warm and with virtually no cloud so I used a turpsy wash to place the first dark tones in the layout as I knew I wouldn’t need to rush like I do with evening paintings. The sun was high and bright so the shadows and colours weren’t going to change much for a while. 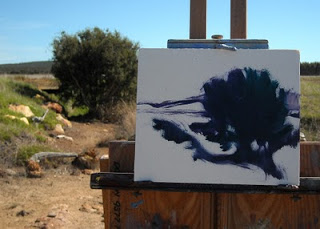 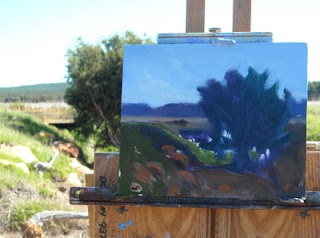 The sky is done and all major shadow tones are in place. 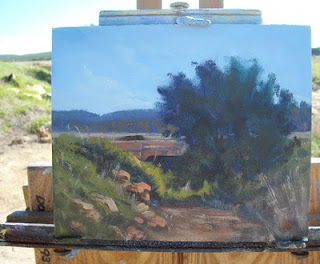 I’ve gone back into the dark tones of the tree, adding a little variety to the shadow areas refining the shape ready for the highlights. Some highlights have been placed in the distance and left foreground. I still need to do highlights on the tree, creek bed and grasses on the right. There was an interesting variety of greens and earth tones to deal with here. It’s a constant process of comparing the relative temperatures of similar colours. 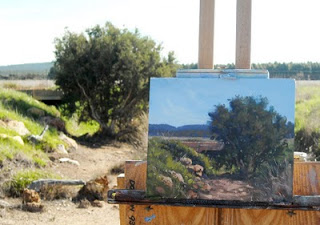 An hour has passed and it’s virtually finished at this point (click pics for a bigger image). The two sunlit rocks near the tree’s shadow in the painting are now in actually in the shade of the tree in the background. I’d taken careful note of them when I started as I knew there was a chance this would happen – and I wanted them sunlit. The concrete face of the culvert has done the same thing as the sun has crossed to road since I began. Again, I took note of this early on. I left the tree until last because I didn’t expect its shading to change much – and it didn’t, phew!

I added and adjusted some minor highlights before I packed up. I’ll post the painting photo as soon as I can shoot it properly.

I left this spot and continued driving around as the weather was still terrific. I took a lot of photos of other places, many of which were in places where standing and painting would be dangerous. The roads around here a pretty quiet but the trucks are big and the speed limits high.

I did eventually find somewhere to stop and paint. I’ll tell you about that and the spectacular sunset that followed next time.