Tit Whale – thanks for the mammaries 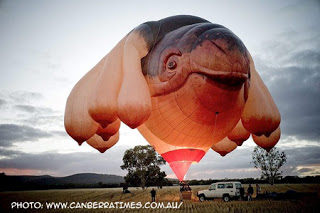 Photo by Karleen Minney,
sourced from the Canberra Times

Made in the UK, the inflated leviathan, officially titled Skywhale (but Tit Whale seems more fitting somehow), resembles a creature that might be more at home in a George Lucas sci-fi fantasy movie than in a community’s centenary celebrations. From the news photo, it appears to be beautifully designed and crafted and I can only imagine how spectacular it looks up close. I don’t get what it has to do with Canberra’s centenary, but I think I like it as an example of, err, something.

Like it or not, there can be little doubt that, with an estimated price tag in excess of $300,000 – to essentially “borrow” the balloon – this will be another art controversy.

As with most public art, there will be knockers who will no doubt wonder what the boobs in our nation’s capital were thinking when they commissioned this thing.

In a valiant attempt to deduce some sort of relevance, I’ve concluded that, filled with hot air, its voluminous proportions are supposed to represent government bloat. Its whale-turtle characteristics pay homage, perhaps, to the slow grind of government decision-making. I suspect the nearly-exhausted glands hanging over the creature’s sides represent the public teat.

I will try to keep you abreast of any interesting and relevant news.

Interested as I am in Art Speak, I decided to see what my favourite Art Critique Generator had to say about this piece.

The generator works by entering any 5-digit number. I chose Canberra’s postcode, 2600, and added a zero on the end for the five numbers. Here’s what I got…

I find this work menacing/playful because of the way the iconicity of the biomorphic forms verges on codifying the accessibility of the work.

More words and pictures at the Canberra Times.