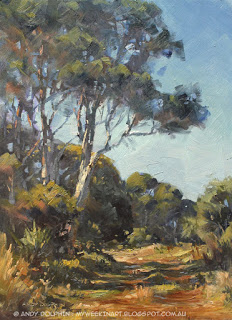 As mentioned in my earlier blog post, I had a pretty clear idea of where I was going with this one. I did a thumbnail sketch and decided that the brightly lit trunk contrasted against the dark foliage was key to the scene. In order to maintain its importance, I played down highlights on other parts of the tree including the second trunk to the left.

The track acts a as a strong support and invites the viewer to consider what might be around the corner. The shadow across the track adds visual interest and I suspect that this scene would be relatively boring if that shadow wasn’t there.