It’s been an interesting week down here. On Monday the weather was threatening and I decided it was about time I tried to do a painting of a rainy day. I headed into town (a two-minute drive) hoping to find some nice reflections of street lights and traffic in the roads, but everything was dry.

I drove around a little until I noticed a nearby hill bathed in sunlight. It was the only sunlight I could see, anywhere. So I perched myself on another hill and had a go at catching the scene in paint.

By the time I’d finished (about an hour and a bit) all signs of sunlight had vanished and Mt Barrow itself was slowly being engulfed in cloud – but it still wasn’t raining. Even so, this was something new for me as I’ve always favoured scenes with strong sunlight and this one had very little of it. Plus, I’ve lived here for over six years and have never painted this close to town (town is that area between the easel and the hazy distant hill). 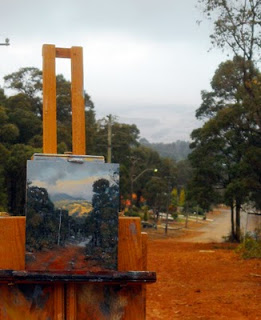 When I jumped in the car to go home I heard on the radio that Perth, our capital city almost 400km away, was being lashed by one of the worst storms in decades.

The following night it was our turn and we experienced one of the most spectacular electrical storms I have ever witnessed with lightning in every direction and for as far as one could see. 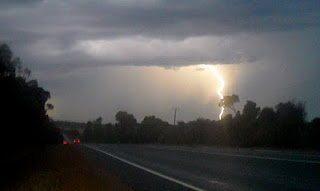 I managed to capture this shot after several tries with a hand-held point-and-shoot camera resting on the steering wheel. There was so much lightning, often in multiple bursts, that I just held the camera pointed in one direction and as soon as I saw a flash I’d press the shutter. When a nearby flash actually shook the car I decided it was time to head home.

It went on for about six hours, with wave after wave of very close lightning and house-shaking thunder. We had a lot of rain but luckily there was almost no wind so damage was minimal, and it was still warm outside as we checked drains at 10pm so it could have been much worse.

The following day, Wednesday, the autumn sunshine returned and again I decided it was time to try a new subject – for me, that is.

I’ve visited Emu Point Fishing Boat Harbour in Albany before and taken lots of photos but have never produced a single painting from them. On Wednesday I took my gear with me, found a shady spot under a tree and did this. 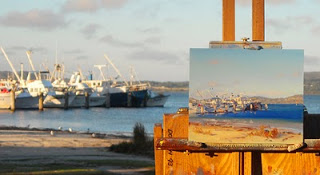 I’m going to visit there a few more times to get a better feeling for the place and see if I can work toward a larger painting. Boats are a huge challenge at this stage and I need to work out how to simplify the process of painting them. Emu Point also has some other interesting areas that I need to investigate en plein air.

On Thursday I drove 200km (124mi) to Williams to drop off two paintings for an exhibition then turned around and drove 200km back home again. I looked around for somewhere to stop and paint but the sun was unbearable and shade was never where I wanted it to be. Safe parking was even scarcer in the more-interesting spots. I did stop long enough to do a painting of a historical inn at Arthur River. By the time I got home it was drizzling with rain and that drizzle persisted through most of today.