Here’s the painting I did yesterday. 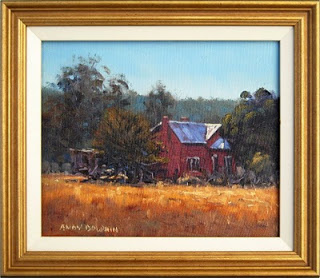 Now, before you ask, no the title doesn’t need an apostrophe. The cottage is in a town called Williams, it isn’t a cottage belonging to William. Okay?

This one took about an hour. Other than the loss of light due to clouds, half way through painting, this was a pleasant experience with very little of the tension that can often creep into plein air works.

Although there is less spectacular light, shadow and atmosphere, I find paintings done nearer the middle of the day more relaxing than than those done at the beginning or end of the day when shadows and the colour of the light change dramatically by the minute.

The interesting challenge with this one was that the cottage is barely noticeable in reality. It faces roughly south so I doubt the sun ever lights up the front. There are trees along the roadside at the front of the property so I’m sure a lot of people drive by without seeing it. I had to decide whether to try and enhance the cottage a little and make it a feature, or to leave it subdued as just a part of the overall mass of shadow tones.

I opted for the latter as I think it feels more abandoned this way, almost as if it’s hiding, forgotten. I didn’t want it to be “pretty”.

Did I mention that I used Australian Red Gold in every colour mix in this painting? It was a joy.