I was pleased, this week, to be invited to hang my work at Riverfront Gallery in Denmark, Western Australia.

As the name suggests, the gallery is located right across the road from the magnificent Denmark River. The gallery space has been expanded in recent years and features amazing works by a number of artists working in different styles and media and I think my paintings will feel at home there.

Denmark is a small tourist town nestled alongside the Wilson Inlet on the south coast. It boasts world-class scenery from surfing beaches and rocky coastline to tall karri forests and hilly farmland. So next time you find yourself anywhere near the south west or south coast and with a little time to spare, be sure to drop in and see Denmark.

In the meantime you can visit Riverfront Gallery on Facebook.

I was very pleased to hear today that two of the paintings I entered into this year’s Wagin Woolorama have won prizes. Rural Morn placed first in Class 1 – Oils & Acrylics. (This painting had a working title of “Barker Shed” back in September.) In the past, when I’ve gone to Woolorama, I have always enjoyed the artworks and often felt I was among friends as many of the artists I knew in Perth have often also exhibited there.

I’ll be there on Saturday to take a look at this year’s exhibition. I posted this painting back in December and mentioned that I had shot video of the process.

Well, I’ve finally got it edited, narrated and posted on Youtube. In the narration for this one, I discuss my thoughts on  limited palettes and learning the fundamentals before getting bogged down in details about media and brushes and surfaces and the like.

In other news, I’ve entered a few paintings in Woolorama this year – my first competition entries for a few years.

The show is on this Friday and Saturday (March 9 & 10) so if you’re nearby, or just feel like a drive in the WA countryside, go along and check it out. There’s much more than art there. There’s sheep too. And other stuff that makes an agricultural show an agricultural show.

I have actually been doing a bit of painting in recent weeks. I just haven’t been doing any blogging.

This will fix that, at least for a while.

On a wonderfully hot day a few weeks ago, I jumped in the car and drove around aimlessly for a few hours. I headed down roads I’ve never been down before; out near Tambellup in the southern wheatbelt.

I ended up at the northern border of the Stirling Range National Park. It’s amazing how often I end up at the Stirlings despite having no plan to go there.

It was getting late when I saw this whitegum growing just inside a farm fenceline. There was room to park the car and to safely set up and paint. So here it is… And here’s the location shot. As you can probably tell, I finished just before sunset. I’d like to do a bigger studio painting from this sketch – and I’ll have to decide then whether to still include the roll of rusty fencing wire. My gut feeling is it attracts too much attention to itself and I’d be better off with a few sheep instead.

Yesterday, I met up with the Albany Plein Air Group and found a new place to paint – at the old Albany Railway Station. I’ve wanted to paint here for a long time but on the one or two occasions when I’ve checked it out, there’s been no subject matter that interested me. But yesterday there was a freight train parked in the perfect position and in good morning light so I set up the easel and got to work.

I began by snapping a few photos, because there was some cloud around and it was likely to get worse before it got better, so I wanted a little “insurance”. Then I did a quick pencil sketch to get the main shapes and tones in my head.

After a quick chat with an inquisitive engineer who told me the train would be staying put for a couple of hours, I set to work on my painting.

Less than five minutes in, another train arrived at the freight yard – and stopped. And this was my view for the next half hour… There was no moving to a better position to regain my view as these trains are well over 500m long and I couldn’t see either end from where I stood. (Looking at it now, I could probably have done a new painting of this scene!)

So I continued painting using my sketch, the small image on my camera’s LCD screen and my memory. And things progressed surprisingly well.

Eventually the train moved on and I could see again. Things had changed a little – and the clouds were being…clouds, but I had enough information to get the job done just before my subject train moved. For my first-ever train painting, I’m pretty happy with it. I hope to do more if I can get the timing right and find decent places to stand. 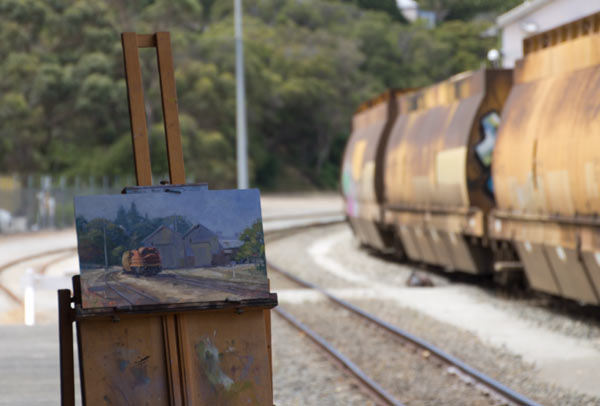 Plein air in the wheatbelt.

Yesterday afternoon, I packed the car and headed north.

The plan, as I told my wife, was “to drive half-way to Kojonup”. Koji, as it’s often called, is about 100km north from home and I ended up travelling about 55km to somewhere between Cranbrook and Tambellup. This is wheat, sheep and cattle country, and not much else.

Unlike the situation at home, the sky was blue out here – not a cloud to be seen from horizon to horizon.

I found a multi-trunk white gum just off the road, with a safe place to park and paint. I had set out with a “plan” to paint a white gum so, despite the flies and the occasional whiff of rancid cow dung, my subject was settled.

Here’s the result of a little over two hours painting.

And here’s the “proof I was there” shot. I used a limited palette on this one – cerulean, French ultramarine, permanent crimson, yellow ochre and burnt sienna, plus titanium white. I wanted to keep it “earthy” and play the warm tones of the dry grasses and tree trunks against the clear blue sky.

The leaf canopy on this tree was very open (you can see it in the background above) and presented quite a challenge but I was happy with the end result.

I did video the process so may upload that to Youtube when I get it edited and narrated.

I have been out and about with the Albany Plein Air Group in recent months.

Here’s a painting I did a couple of weeks ago in the Albany Whaling Station precinct. The White Garage
25x30cm oil on board.
© Andy Dolphin

And here’s the location shot. It was a beautifully sunny morning – hot in fact – and this white garage contrasted against the dark shadows of the foreground tree caught my eye. The white picket fence in shadow added more interest.

There’s a little over two hours work in this one – longer than I usually like to spend on a plein air piece – and all the shadows shifted dramatically from start to finish. The viridian green got away from me a little but I hardly noticed it while standing out in the full sun painting. Still, I’m pretty happy with it and I think I will do a studio version of it one day.

And here’s one from today’s visit to Wignalls Winery. Study in Light and Shade
30x25cm oil on board.
© Andy Dolphin

I’ve always wanted to do a painting like this but have usually dismissed similar subjects in favour of more “normal” paintings, like views across the landscape. But today, this fallen stump presented such harsh contrasts of light and shade, I decided I had to paint it.

I left viridian off the palette for this one and chose to mix all greens using combinations of cerulean, ultramarine, lemon yellow, cadmium yellow, yellow ochre, burnt sienna and cadmium scarlet – though not all at once. With summer just a week away, the paddocks are losing winter’s acidic greens and taking on some warm earthy tones, so the viridian may get a rest for quite a while. Thanks again to Albany Plein Air Group for inviting me along, and to Wignalls for allowing us to paint there.