I’ve not had much opportunity to get out and paint recently but did manage these two quick sketches in the last week.

The first was completed in around 15 minutes and was the end result of a “comedy of errors”.

I was breaking in a new French easel and had prepared the palette by staining it with old oil paint to give it a dull grey colour – much better for mixing paint on. When I arrived on site to paint (after driving around aimlessly for over an hour, close to sunset), I opened up the easel only to find I’d left the palette at home. Hmmm.

Luckily, I usually carry a few primed painting boards with me and one of these had to play at being a palette for a while. I wiped a bit of turps over it to give it a bit of slip. It wasn’t too bad but did hold onto the paint mixes more than a properly prepared palette.

By now, the sun was already low and things were starting to colour-up. So I put a red, yellow and blue out and started painting. I was set up in front of a farm gate and, sure enough, the owner came along and needed to get out. So I moved a couple of metres across and continued. Then the sun disappeared behind clouds, then everything turned shades of red – before going dark. I strapped a headlamp on as I added the final brushstrokes. 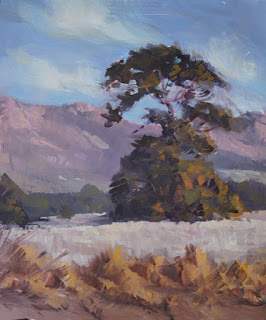 The second painting was a little more straightforward. It was still begun a little later than usual and the sun did tend to hide behind clouds most of the time but I got an extra five minutes or so to complete it before it went dark. I’m going to go back to this spot again with a bit more time up my sleeve. 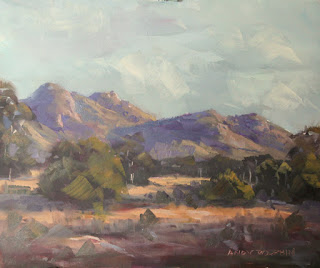 I have been working on another painting for a few weeks now. It’s a new subject for me and I’m taking a different approach with it. It’s proving more challenging than I’d anticipated but hopefully I’ll post a finished pic soon.