On the road again…

I had to drive to Williams again today to pick up two paintings. It’s 200km one way.

Luckily, the weather was beautiful; another clear autumn day. I arrived there around 1pm, did what I had to do, ate a bit of lunch, drank coffee, did a quick sketch in the car park at the roadhouse then headed toward home.

Before I even left the Williams townsite, I decided to take a detour and just out of town, two minutes down the road in fact, I found an old, abandoned cottage surrounded by overgrown trees and backed by a timbered hill. 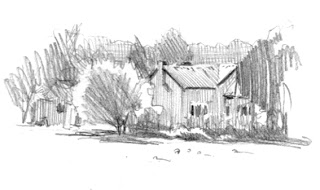 I did a quick pencil sketch while I decided if I should stay and paint it. It was already 3pm and I still had a two hour drive home and kangaroos tend to cross the road as the sun sets. 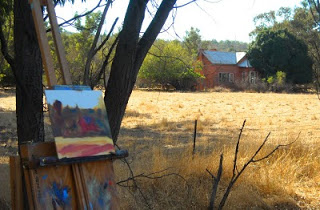 Once the sketch was done I’d convinced myself it was worth setting up the easel. There was an inviting shady spot and it was a fairly quiet road so I had no excuse not to give this one a go.

Looking at the photo above, it looks like I’ve painted the blue sky in. I haven’t. That blue on the canvas panel is just the natural light on the white gesso. That’s how blue shadows are! The photo below was taken immediately after the one above – both are at the same stage, including that warm bit of tree on the far right that I ultimately decided to leave out. Even here there’s a hit of blue in the sky but that’s because I didn’t colour correct it enough to completely remove the blue tint. 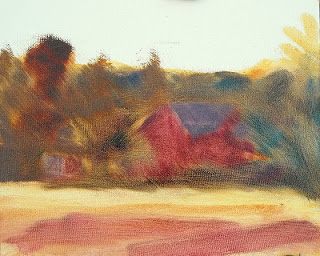 There was a definite warmth washing through the whole scene so I gave the canvas panel a quick wash with Australian Red Gold and Burnt Sienna. Then I went in with a simple wash of basic undertones using enough turps to keep the layer thin. It was warm so I expected this would dry as I continued painting. I feathered the underpainting with a clean pastry brush to knock off any thick raised edges and to blur it so it didn’t start to “lecture” me on where things should go.

I bought my tube of Australian Red Gold (ARG) years ago – I can’t even remember when but I suspect it was more than six years ago – and I’ve never once used it in a painting until today. Since I had it on the palette from the first wash, I decided to use it in my mixes.

ARG is a translucent yellow very much like rich, dark honey or treacle. In a pile it looks brown but spread thin it glows a vibrant golden yellow. I was amazed by the colours I got when mixed with my usual palette. Mixed with white it looks edible! 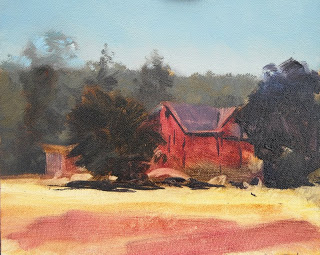 Here I’ve started to go in with final shadow tones. My main interest is keeping my dark and mid tones distinct and grouped. Even the silver roof of the cottage is a part of the shadow area. The red brick wall is a bit bright and saturated here. If you squint at the above pic (click for a bigger image) you’ll see that the red jumps out too much from the dark trees either side of it. And it glows almost like it’s in sunlight so it needs darkening and neutralising with a bit of ultramarine blue and ARG. I need to play warm darks against cool darks. This is one of the biggest challenges we face when painting en plein air (along with snakes, biting insects and clouds!).

The sky is mixed from ultramarine, white and ARG. The distant hills are mostly ultramarine and ARG with a little crimson thrown in the neutralise it (make it more grey, less saturated) then lightened with some of the sky mix. A little more white and ARG was added to suggest sunlit tree tops with the whole area kept soft to stop it coming forward.

From here on I was concentrating so much on painting that I forgot to take photos. Sorry. I can tell you that, quite unexpectedly, clouds rolled in and I lost my light. Bummer. Luckily I had a firm image in my mind from doing the sketch and there really weren’t many sunlit areas anyway (it was really lucky that I had a mind-image because the photos I’d taken before I started are awful so I wouldn’t have been able to use those to complete the painting).

The biggest problem now was that without the harsh sunlight, the shadow areas suddenly had detail. I could see all sorts of tones in the dark tree on the right, for example, that I couldn’t see when the sun was out because the paddock was so bright. I was careful to ignore shadow detail as I soldiered on.

I left the foreground until last because the warm under-painting was a reasonable approximation of the final tone and colour. Then, just as I was painting it, the sun came out again – sort of…

Farmers like to burn their paddocks in autumn and it became apparent that someone was doing that nearby. The air was now filled with smoke and this gives sunlit areas an unnatural orange tint. The light was a useful guide for finishing the painting but I had to ignore the colours.