Three updates in one! 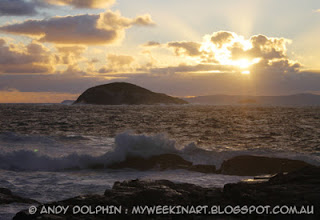 More fine weather and back to the coast I go. Still getting my head around the apparent chaos of waves, breakers, foam and rocks. 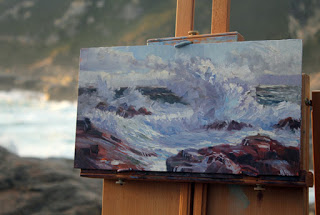 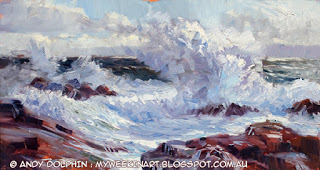 (Another Breaker. Sketch. Oil on board. © Andy Dolphin)

My aim with each of these paintings is to try and capture the form and energy of the waves, without referring to photos or other people’s paintings – and trying to ignore “what I know a wave looks like”. I want to witness it first-hand and get it down in paint. That’s only going to come from staring at, and painting, a lot of waves.

On Thursday afternoon I returned to the same place but decided to move over about 20m and face in a different direction.

The sky was mostly clear and the sun was already low. The translucent green topping each big wave that came through caught my attention.

I used ultramarine, burnt sienna and yellow as my base colours and added spectrum viridian (a pthalo green derivative) to the palette to deliver a crisp, clean transparent green. The problem with this is that spectrum viridian is a strong-tinting colour and if it’s on the palette then, during the plein air rush, it’s going to find its way into everything that has even a hint of green in it.

The sun was setting fast while I painted and the scene changed dramatically as the light warmed. I finished after the sun had set. Here’s how the painting looked on location. 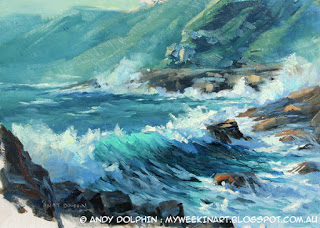 The photo above shows how it looked in the light of day this morning. Despite the overall green tone, I’m really pleased with it. But I decided to make a few adjustments, while it was still wet. 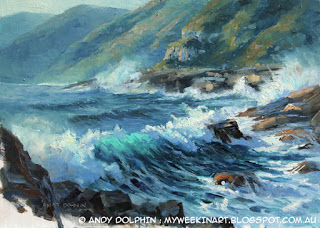 I’ve gone over most of the painting with subtle colour shifts. I’ve added blues and siennas to counter the greens – except where a clean green was essential. The biggest change is the background hills. The old green was too “electric” (pthalo green will do that), so I made it more “earthy” (is that a word?) – now the water and shrubbery are clearly different things.

Today I was going to stay in the studio and start a bigger piece. But after making the adjustments to yesterday’s painting, I looked at the weather forecast and decided to go back and have another look.

I zoomed in a bit closer than I did yesterday, focussing more attention on the rock being swamped by the breaking wave. I used a different palette for this one – no viridian – and took more time.

Here’s how things looked when I packed up – just before the sun set (you can see the warm glow of the setting sun on the side of the easel and in the distant haze). 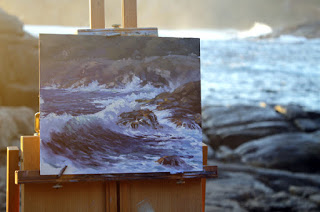 (And… another location shot)

I’ll tell you more and post a finished photo tomorrow.

The photo at the top of the article shows the spectacular end to another day’s painting. All three days had similarly beautiful ends.