I’ve headed out to the Porongurup region a few times this summer with camera and sketch book in hand. The logisitics of the region mean that photos are often easier and safer than sketches or on-site paintings since there’s not much space on the side of the winding country road for safe parking – but it’s a quiet road so there’s usually enough time to snap a few photos before moving on.

I usually head out in the early evening to catch the last light of the day on the mountain range. On a good day the sky, mountains and farmlands take on spectacular hues. A few weeks ago I was there on just such a day. 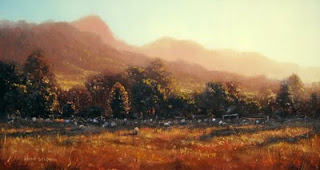 This is essentially a monochromatic work exploiting the warm evening light. The grass is dry and pale at his time of year so its colour is dictated mainly by the light it catches from the setting sun and the blues reflected into the dark shadow areas from the eastern sky. A subtle zig-zag pattern is created through the foreground ridges, mid-ground shadows and the slope of the range, helping to soften the strong horizontal band of trees.

My procedure for this, as with most of my work, was to do a small pencil sketch from the photo viewed on the computer monitor. I make colour notes on the sketch and use this as my painting reference. I re-check the original photo as the painting nears completion but I’m only looking at the overall impression, not detail. If it didn’t stick in my head after sketching it then it’s probably not important enough to put in the painting. That’s why it’s called “impressionism”.

The Porongurup Range holds a veil of humidity not always apparent in the West Australian landscape. This enhances the aerial perspective with the peaks of the range are quickly sucked into the atmosphere as the light fades. This was an attempt to capture that effect.

A note of in interest: there were no sheep in this paddock that day but I put them in for a bit of additional interest and as a cool counterpoint to the overall warm tones. They bring a little of the blue sky down into the lower half of the scene.

This painting is entered into this year’s Wagin Woolorama in March.