It was another interesting week weather-wise.

Monday was fine and warm so I headed to the Mount Barker lookout in the evening and was lucky to find clear skies over the Porongurup Range in the east. The three-quarter moon had already risen and was just above the horizon. This was good because I wasn’t entirely sure exactly where it would come up.

The distant range was already turning a deep reddish purple and I knew from experience that the sky would take on a warm pink hue as the sun was setting so I began throwing paint on a board with that in mind. 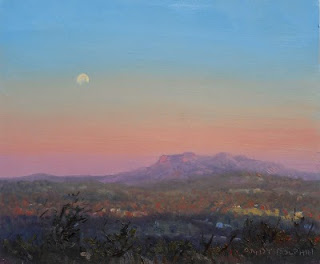 This was completed on-site in around half an hour. I added a tiny amount of fidgety detail back at home – around five minutes worth. This, I’m certain, is my first ever moon painting.

Tuesday was hot with no time for painting and by Wednesday it was raining again. Late on Thursday night the lightning and thunder returned and continued through Friday (Good Friday).

On Friday afternoon I headed out to see what the clouds were doing around the place and settled on a view over the pavilion in Wilson Park, in town. I knew I’d have to work fast so I didn’t bother with any turpsy washes for this one. Instead I roughed in the major dark masses with straight oil paint – an ultramarine, permanent crimson mix. 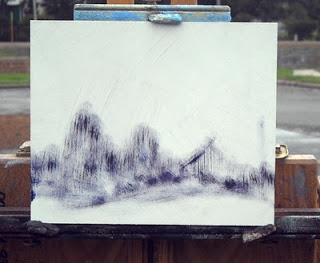 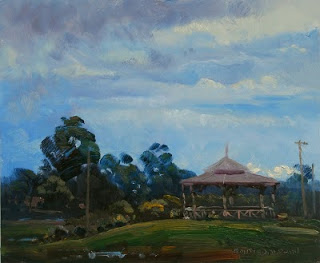 This was another fast one as not only were the cloud shapes changing by the minute but it started to rain on me half-way through. By the time I packed up there was as much water as paint on my palette. I blame the “wonky” pavilion on the weather 🙂

I was fully-charged after this one and drove off to see what else I could find while the thunder and lightning continued to go through in waves. Some huge cumulus clouds had gathered in the west and were catching the afternoon sunlight so I found a spot on the side of the road and sat in the van and painted.

It was a bit of a juggling act with the palette on my lap and the primed panel in one hand, brush in the other, plus it was raining in through the open window. I didn’t really care if I got much landscape in this one. It was in full shadow when I started anyway. The cloud was what I wanted.

Things progressed pretty well as the cloud slowly drifted out of view. Then the sun lit up the ground as well so I threw a bit of it in. By the time I left there was very little cloud in that direction but there were still distant lightning strikes visible in the north. 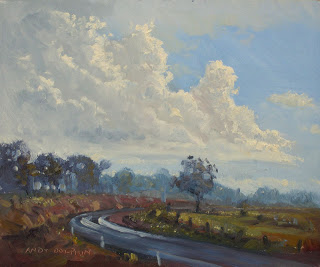 The photography on these is pretty horrible and the colours leave a bit to be desired. I’ll try to re-shoot them if I can.