Firstly, here’s the first painting I did yesterday. I’ve popped it in a frame for you. I had this frame made just for this purpose – it’s a great way to “test” paintings. Sometimes they look much, much better in a frame and sometimes they confirm my worst fears. If they look good, then I can go ahead and get them framed properly.

I’ve done the same thing after painting demonstrations but it’s usually best to wait until the paint’s reasonably dry or it can get messy. 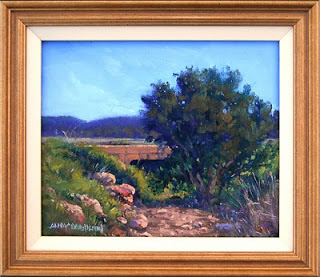 After I’d finished that one there was still a good few hours of sunlight left so I drove around looking for other subjects and taking lots of photos. I eventually found a spot where I could park the van and stand in its shade (I’d had enough direct sun for one day). 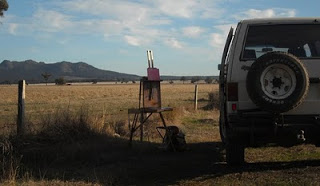 She’s 25 years old but she still has her uses.

I was in two minds whether to paint here or not as the light was still fairly white so there wasn’t a lot of colour on the mountains or the paddock stubble. But the atmosphere behind the distant trees, and the fact I had a shady spot, made the decision for me. Still, there wasn’t much time left now before the sun would set so this was going to be another fast one… 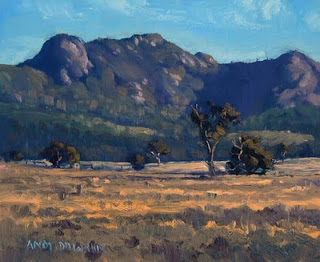 This is what I ended up with before the sun went down and the whole scene was cast into shadow. The colours aren’t great, partly because of the rush and partly because I couldn’t clean the brushes properly from the earlier effort so there’s a bit of green in everything.

Even so, I’m happy with the overall sculpting of the mountain and that major shadow that first attracted me. With this, a photo of the area and maybe another visit on a similar day, I think there’s potential for a reasonable sized studio painting.

I put my brushes down  and looked behind me. This is what I was missing… 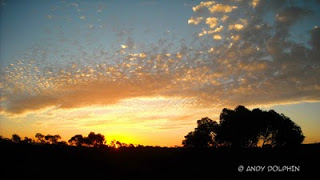 Rest assured the photo does not do it justice. I drove home, into the sunset.