Bluff Knoll is the tallest peak in Southern West Australia. It lies in the Stirling Range and is about a one hour drive from my home.

Come this Monday, my family and I will have been in Mount Barker for eight years but in that time, I’ve been to Bluff Knoll only three times, and never for painting. I finally fixed that this morning.

I was up at 4:30am and, after cereal and coffee, I was out of the house shortly after 5am. I arrived at the Bluff Knoll car park around 6am.

We’d been promised a sunny day in the Great Southern but the Stirling Range creates its own weather and there was no shortage of cloud and a heavy veil of “atmosphere”. Still, it was a pleasant, if slightly cool, morning so after scouting around for an interesting vantage point, I set up my easel and got to work.

When I began there wasn’t much sunlight and I thought I was going to have to focus on the clouds drifting across the top of the bluff for interest. But as I was laying down my first washes, the clouds, mist and distant peaks took on a wonderful warm glow. There was my subject!

The light played hide and seek as I pushed on but I managed to get enough information down early on to capture the feeling. Here’s the result after about one hour… 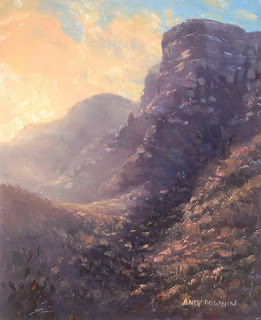 I used a limited palette of just three colours, French ultramarine, permanent crimson and cadmium yellow light, plus white. This helped to move things along a little faster although I did have a few moments of trying to mix the right shade of reddish, yellowish, bluish green-purple.

The light began changing dramatically with more foreground being lit with each passing minute – and each passing cloud. Finally I had to tell myself to “stop”. I told myself two more times before putting the brushes away.

Here she is on location… 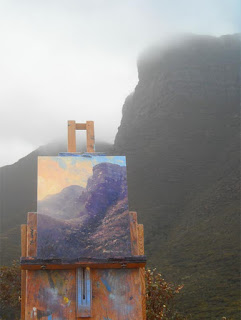 You can see how dramatically the light was shifting with absolutely no sunlight on the mountain in this shot. Luckily these “very grey” moments were few and far between, though they at least gave my eyes a rest when they came as I was looking almost directly into the sun.

Hopefully I can get a better photo of the painting when it’s dry.