When painting on location, there often isn’t time to mess around with composing a scene.

If you have plenty of light left in the day, it can be very handy to knock out a couple of one-minute thumbnail sketches to see what presents itself as a strong composition. But as sunset draws near, those couple of minutes become precious. And you don’t necessarily have a lot of different shaped boards to choose from when you’re out and about so your composition options are limited from the outset.

This evening I headed back to the coast (almost 70km away) to see if I could do another cloud painting. We’ve had heavy cloud all day, not ideal conditions for painting either clouds or sunlight, but I decided to take the chance.

I arrived at Mutton Bird Beach about an hour-and-a-half before sunset and looked around for possible paintings. I did a few thumbnails but the light was dreadful so I continued looking around the area since I’ve not spent much time there before.

After walking a couple of kilometres down a four-wheel-drive track, and finding a spectacular location for future paintings, I headed back to the car park about half-an-hour before sunset.

The sky had cleared dramatically and Shelter Island was almost-glowing in the evening light. I knew it wouldn’t last.

I quickly set up my easel, grabbed a board and began painting as soon as I could. Composition was the least of my concerns, I just wanted to record the sunlight. I didn’t even stop to take a photo to use as a reference later, if I needed it.

I wanted to get rid of the white of the board so I could lay in some of the sunlight colours fairly accurately. I washed in major tones with paint so thin it was like watercolour – it’s faster that way. Then I mixed up a couple of warm colours for the sunlit shrubs and rocks and roughed out those areas.

The island enjoyed sunlight for about five minutes after I began painting then the sun dropped behind a bank of clouds. With the sunlit image pretty clear in my mind, I continued painting even though everything was now in shadow.

In some respects, it was probably handy that the sunlight had gone because I wouldn’t be teased by the scene changing colour every couple of minutes, as happens at that time of the day, and I could stick with the colour decisions I’d already locked in. I also had to not be distracted by the amazing stuff going on in the western sky (it was a gorgeous sunset).

I packed up when I realised it was so dark, I couldn’t really tell what colour I was using anymore. 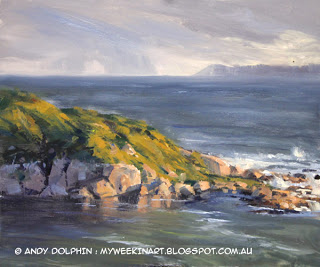 The painting is pretty rough. Some of the paint is so thin, I don’t think it could be considered archival, so I can’t sell it. I also think the composition is pretty boring. But I really like the main area of light and shade so I took a quick photo and messed around in Photoshop to see what compositional possibilities there were. 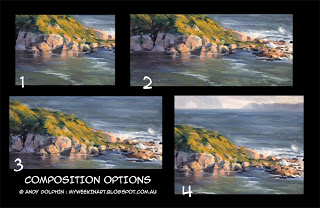 I particularly like the intimacy of option number two and think I might head back to the location with that composition in mind as my starting point. And, with half the problem already solved, I could probably do a larger painting and take a little more time by starting earlier in the day.

Over the last couple of years, my attitude to plein air work has changed – and continues to change. I used to only paint if the light was perfect and likely to remain stable and if I was pretty sure I’d get a finished painting from a session. I’d usually spend two hours or more on one painting on location.

These days, I’m forcing myself to be more adventurous. I head out when it’s cloudy, I start paintings late in the day when stable light is not just unlikely, it’s impossible. I paint fast and I end up with whatever I end up with. Sometimes I get a result that’s worth framing, sometimes I need to do some touching-up in the studio for a frameable result and other times I scrape the painting, or let it dry then throw it in the corner, with all the other “could-a-beens”.

Quite a few of the paintings I’ve posted on this blog are in that pile because the blog isn’t about great art but the pursuit of art. I’m pretty fussy about what I actually let out of the door and into the market place.

But the “failures” still have value, even if it’s just from the act of getting out and painting – and that is possibly the most valuable part of the experience. It’s taken me a long time to realise just how important it is to just get out there and paint and “bugger the consequences”.

Twelve months ago, or even six months ago, I would not have thrown the easel in the car on a day like today. I would have looked out at the grey sky and decided to give painting a miss. As it turned out, I took the chance, went for the drive and had an amazing afternoon.

I still struggle with painting when there’s no clear sunlight and shadow, but that can be next year’s project.