Third update for the day.

I was up just after 7am and the sky was clear and the sun was just beginning to shed light on things. So I got my gear together and headed out for a little “early-morning” painting.

If you’ve been following along in the last few weeks, you know what happened next. Yes, the clouds rolled in. But I soldiered on.

I set myself up in a paddock looking towards the abandoned cottage I painted last weekend. I noticed this view yesterday afternoon and realised it would light up nicely in the early morning.

And I was right. Things were exactly as I expected, when the sun broke through the clouds.

I did a quick thumbnail while the sun was shining and committed as much of the scene to memory as I could. It was far too cloudy to risk a big painting so I grabbed a small board and set about doing a sketch. 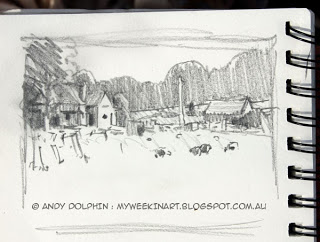 It was cloudy most of the time, so plenty of memory was required and it rained on me, again, and it was cold (I wore my gloves again and even took a mid-painting warm-up walk) but things progressed pretty well. I spent about an hour and a half on this one, which is a bit longer than usual for a small sketch but things do slow down when the clouds roll in. I finished off the foreground and touched up a few details when I got back to the studio, so add another 15-20 minutes. I used a limited palette of ultramarine, burnt sienna and cadmium yellow deep. The lack of a true red meant that shadow tones and greys would retain an earthy hue rather than leaning toward purple. The burnt sienna under-painting shows through in a few spots too, including the warm glow in the otherwise-grey sky.

And here’s the “oops, I packed up and almost forgot to take a location shot so I’ll just lean it against this fence” location shot… 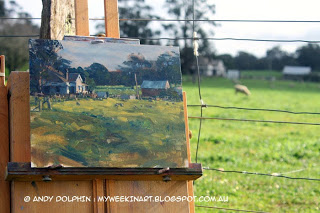 So now I’ve done eight paintings in the last few weeks and have been rained on six of those times. I think that’s a record for me. Lucky I don’t do watercolours.

I’ve checked tomorrow’s forecast and apparently we’re in for some more rain. So I guess I’ll venture back outside and see what happens.