Terry Miura set a “simplify” challenge on his blog.

The main thrust of the challenge is to simplify a photo Terry posted and produce a painting using any medium. 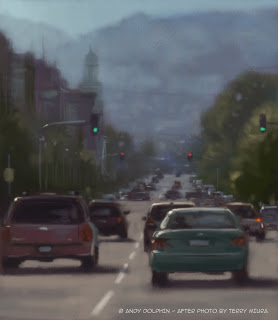 I had intended to save the image in stages – but forgot so this is all I have.

My process was to crop then convert the original image to greyscale and use that as my starting reference. I wanted to warm the scene up a little so, using a Wacom pen and tablet, I “underpainted” in a warm sepia tone. I then switched the reference photo back to colour and finished my painting from background to foreground.

I painted in the large shapes first with little concern for absolute accuracy. The rough shapes were initially tightened by working back into the negative shapes, painting the road around the cars for example, then strengthened by the addition of mid-tones and highlights. I finished with the brightest highlights, including the “pure” colours of the traffic lights and vehicle tail lights.

No tracing is involved in the process. The two images sit side-by-side, with the photo kept small to avoid getting bogged down with detail. As you can see below, I took liberties with several aspects of the scene. I was more interested in capturing the feeling than producing a replica. 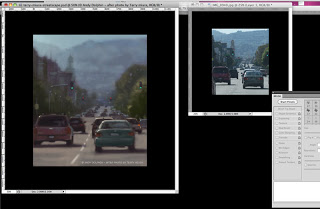 There’s about half an hour to 45 minutes work in this. I used a standard Photoshop stipple brush (and forgot to change the angle jitter setting) for this one. I usually use a custom brush from Chris Wahl but was almost finished before I realised what I’d done (I work zoomed out, so the stippling doesn’t show).

My digital process almost exactly matches the way I work with oils – but I don’t have to wash brushes when I’m finished – and I don’t ruin another shirt or get paint on the carpet!