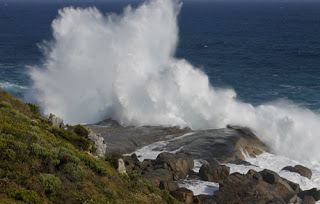 My second painting for 2013 was, in some ways, an exercise in not giving up.

We’ve had pretty strong winds for the last couple of days so I assumed the surf would be pounding along the southern coast. With this in mind, I decided to head to Lowlands Beach, between Albany and Denmark, to see what was happening.

It was pumping! The spray in the photo above is reaching over 50m high, in strong wind.

I stood at the lookout, high above the rocks, and stared. The action below was non-stop and complicated. I must have pondered the scene for 45 minutes or so trying to select an area and cement an image in my mind. Several times I considered moving on to find a location that was simpler and more protected from the wind.

Eventually I just decided to sit and scribble a thumbnail. Hmmm, possibilities. With that done, I decided to set up the easel and have a go. I haven’t really painted in a situation quite like this before but, since I was prepared to fail, it didn’t matter what result I got.

I decided to just rough out where the major rock forms were but not complete them, yet. Then I focused my attention on the area where the breakers were hitting the rocks. Every wave is different and the bursts of spray last mere seconds, so there’s a fair bit of invention involved in capturing the general feeling. I put the burst where I wanted it.

I worked my way out from the focal point and completed other areas in stages until I was happy with the results. By that time the sun had almost set. 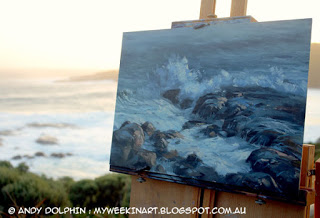 And here’s the painting… 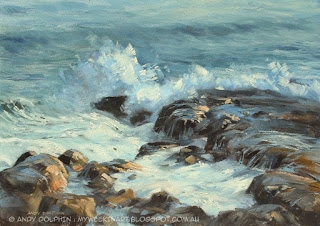 It’s funny that once the painting is done it all looks so simple, but there was a lot of stopping and staring involved in this one. I spent almost as much time squinting at the scene as I did painting. The lesson here is to not give up and to accept possible failure as a part of progress.

I used a very limited palette on this painting. Ultramarine, cerulean, burnt sienna and cad yellow deep. Mixing nice transparent purple-blue shadows is impossible with that combination of colours but it really wasn’t that kind of day anyway. Limiting my colour choices meant I could concentrate more on composition and tone.

Here’s how my mixing palette ended up… 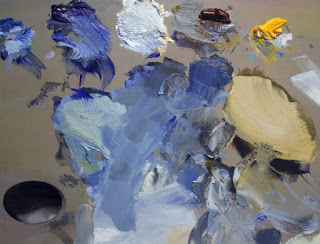