Back in February, I entered a challenge set by US artist Terry Miura to paint a simplified version of a streetscape from a photo he supplied.

I chose to enter a digital painting, done in Photoshop, but it did whet my appetite for doing a streetscape of my own, in oils.

I used a primed board with a burnt sienna wash then followed the basic approach recommended by Terry – careful drawing, tonal map, transparent under-painting finishing with opaque paint. 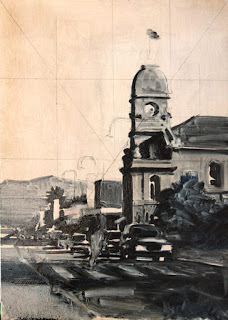 You can see the gridded pencil drawing in this photo of the tonal map under-painting. The idea here is to simplify the image into three or four major tones. 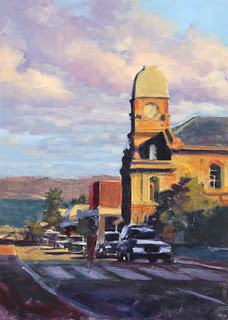 Then, (mostly) transparent colour was applied over the tonal map. Each area of colour is matched to the tone of the under-painting. Some minor adjustments have been made at this stage too. 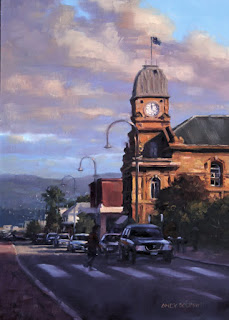 Here I’ve painted over almost all parts of the scene with opaque paint but I am still guided by the tones built up in the earlier stages. Again, I’ve made subtle changes to areas as I’ve seen fit, in particular reducing the size of the sunlit areas of road in the middle distance. I’m not certain that I’ve finished with this one yet. I’m going to live with it in a temporary frame for a while and see what happens.

The painting depicts the main street in Albany, a small coastal city just 50km from my home. It’s a very different subject for me but one I’ll be investigating further in the future.

Terry Miura is a tonalist so his paintings are essentially monochromatic in that they often have a single colour permeating every part of the painting – and his major focus is on contrasting areas of lights and darks. Local colour and temperature shifts still play a part but are subordinated in his work. Terry is also pushing himself toward being more abstract, so detail is implied rather than stated. The combination of these things results in exceptionally moody and atmospheric scenes.

I live almost 400km from the nearest major city and I’m surrounded by farmland. Down here in southern West Australia, the air is clear – visibility extends beyond 50km on a typical day and colours are saturated for most of the year. On top of this, I am strongly attracted to the interplay of warm and cool parts of a scene.

While I have followed Terry’s basic approach, and while tonal contrast forms the foundation of my paintings, I lean toward colour and temperature contrasts rather than tone alone.