While summer was colder and wetter than we usually get down here, autumn has been spectacular so far. The last few days in particular were hot with mostly cloudless skies, day and night.

I took the opportunity this afternoon to go an paint a subject I noticed a long time ago. 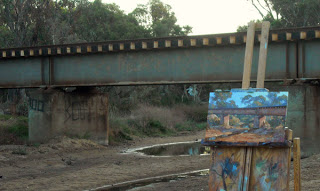 This bridge carries the Great Southern railway line over a small creek near Kendenup. That trickle of water is probably more than it usually has at this time of year.

Plein air painters have a phrase “chasing the light” and I experienced it full on in this painting.

I started about 4pm, as the sun was casting a shadow of the steel bridge on the creek bed. It was 5pm by the time I finished and, as shown above, the whole scene was in the shadow of the distant trees.

I had to establish major shadow positions and angles at the start and try not to “chase the light” as the major shadow moved away from the bridge and toward me, which it did quite rapidly. I used a limited palette of four colours plus white to save time.

It was a subject I’ve never tackled before and quite a challenge. I might go back another day and try a slightly lower angle so I see a little of the underside of the bridge as this would give me a nice strong shadow tone and probably some warm reflected light. I hope there’s still a bit of water flowing when I get there.

I’ll post the finished picture when I can get a good photo of it. In the meantime, here’s the plein air painting I did near Woodanilling a few weeks ago… (Near Woodanilling. 20x22cm oil on board. © Andy  Dolphin)
Share on FacebookShare on TwitterShare on Google+