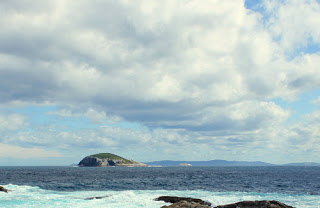 I made the decision that, with fine weather forecast, I’d head out to a spot near Albany that offers incredible views over the Torndirrup coastline. My plan today was to come home with more than just photos.

I found a spot just off the walk trail, and a few metres short of a very long drop over a very high cliff. I was around 180m above sea level. The sun was shining, the sky was clear and there was a gentle breeze blowing. It was near-perfect. So I set up my easel and got to work.

I worked on a panel that had been stained with burnt sienna. I used it mainly because I had it with me and it was the right shape.

Knowing the light would change dramatically, I pre-mixed small samples of critical colours and referred to these throughout the painting process. I used my oil colour chart to determine the best colours to use for each mix and was surprised to note that the deep ocean was almost a perfect match to cerulean blue out of the tube. In fact, cerulean featured in mixes throughout the painting from the sky to the sunlit hills and rocks.

I approached this painting is a relatively steady manner, rather than as a quick sketch. I roughly outlined the major shapes, separating sunlit and shaded areas, before under-painting all parts in approximate final colours. Then I painted the sky and worked my way down and “forward”, painting into all areas before adding the white-wash along the edge of the coastline. I left the white-wash until fairly late in the process because it doesn’t really shift much in colour. My main concern was the shadow side of the hills because I knew those shadows would disappear completely as the sun moved higher in the sky. I finished with dark accents and highlights.

A strong wind warning had been issued for the afternoon and the breeze grew steadily over the two hours that I painted. I eventually had to take my hat off because I was holding onto my easel with my spare hand. If anything blew away, I wasn’t going after it! 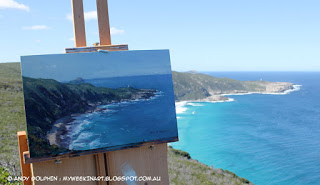 While I was packing up, TRAGEDY!!!! struck!!! (Yes, there were definitely exclamation marks when it happened). The very wet painting fell off the easel and face first into the sand. Hmmm. 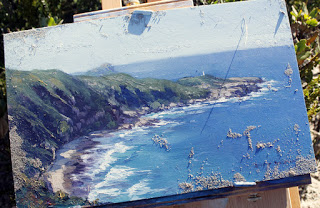 “Golly gee!”, I said. “That’s just a little bit too authentic”, I added. Or, something like that.

When I got back to the studio, I decided it was worth fixing. Using a razor-blade scraper, I carefully removed the paint where the sand was stuck, leaving a ghost of colour behind. I mixed up some fresh paint and set to work. It only took about half an hour to recover things. 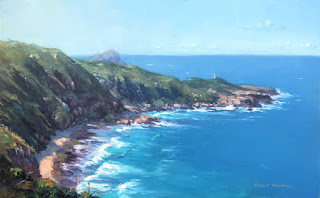 Here’s a few “quick” sketches I’ve done around the Torndirrup coast in the last week or so. 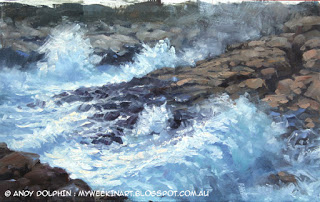 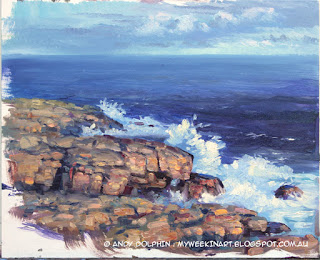 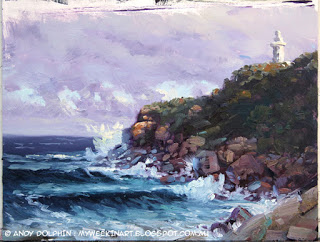 Showers are forecast for tomorrow but I might head to the coast again, and see what’s happening.