A few weeks ago I had a local cabinet maker cut some 3mm MDF into small panels for me. For $30 I got 60 panels of 20x24cm each. What a bargain! This sure beat cutting them with a handsaw as I’ve done for years.

These are to be used for quick studies and on-site sketches so I gave them one coat of acrylic gesso with a small foam roller (I usually double-prime with a random brush action). They are so small and cheap I can afford to mess up with them without getting gloomy and wanting to take up golf instead of painting.

I went out two evenings in a row this week. Both were at the end of very warm days (close to 40º Celsius) with mostly clear skies. But skies don’t stay clear around here for very long so I just knew any painting I’d do would very likely have clouds in it. With that in mind, I went out with a plan to paint some cloudy skies, a subject I’ve mostly avoided until now.

The first painting shown below came almost by accident. I was facing in one direction working on a less than spectacular scene when I looked behind me and saw a sunlit paddock and clouds just begging to be taken notice of. I abandoned my first painting, turned around and worked like mad to throw these colours down. There’s about half an hour’s work here, maybe less – that’s longer than the real-life spectacle lasted.

The second painting of a distant Stirling Range was done the following evening from the Mount Barker lookout. The light was changing quickly on this one and I revised some sections as I went, adding more warmth to the sunlit clouds. By the time I’d finished, less than an hour, there was no sunlight shining on anything at all. 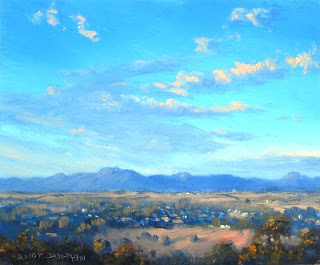 These sketches aren’t perfect but provide a solid basis for larger paintings in the future. There are colours in both these skies that just wouldn’t be there if I’d worked from a photograph. That exquisitely luminous blue-green (cerulean blue with a touch of cad yellow light into white) in the lower half of both skies was very apparent whilst staring at the scene yet I don’t think I’ve ever seen it like that in any photos I’ve taken.

There’s nothing like working on location to refresh the mind’s eye.