It took a while to arrive, but spring did show itself for a few days recently. But, with summer just two weeks away, the grey weather has returned.

I bought myself some new brushes recently. I’ve been using flat synthetic brushes for the last couple of years but now I’m returning to good old, tried and tested hog bristles. The synthetics started to get a little bit too frustrating as they loose shape fairly quickly, even with careful washing and storage. They also occasionally refused to let go of the paint when making a stroke and I found myself adding more and more turps or medium to try and get things to work properly. There were times where this seriously slowed things down and time is one commodity the plein air painter rarely has enough of.

I might write a bit more about that once I’ve tamed my new bristles.

The continuing grey weather has given the opportunity to spend a little time in the studio and this week I did something I’ve rarely done in the past – I painted over some plein air sketches that I felt needed a lift in order to become frame-worthy.

The first one is a painting I did a while ago. It was painted very late in the day and the light faded fast. I used a “pre-mix” approach where almost all the colours are mixed on the palette before any colour is applied to the painting surface.

I mixed a few main colours for the trees – shadows and highlights, warms and cools – two for the hills, a few for the ground and two for the clouds, plus some blues for the sky. This was a first for me and I can see some potential advantages in the method when the light is changing fast, but I’m not sure how often I’ll use it. What I generally tend to do is use a mix-and-apply approach in combination with pre-mixes for some specific areas where I want to lock-in colours at a given time. 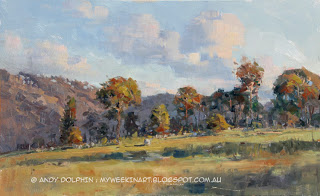 I liked the general structure of this one but the major forms were a little fractured and it lacked punch. I particularly wanted the sheep to catch a bit more of the evening sunlight. So I carefully scraped back the dry paint with a new palette knife, to get rid of the biggest ridges, and got to work. Here’s the result… 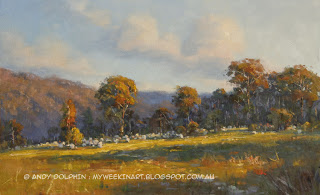 My second re-do was first just two weeks ago. It was a perfect afternoon and I hadn’t looked at this location before. The distant air was thick with sunlit vapour and almost swallowed the Porongurup Range less than ten kilometres away.

This was the first time I used my new brushes and was very pleased with the process. Here’s the painting as it stood when I packed up… 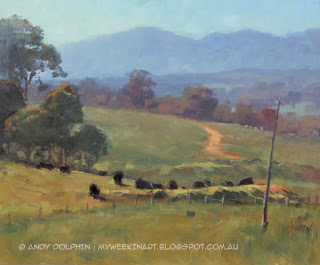 …and a location shot, of course, for people who like that sort of thing… 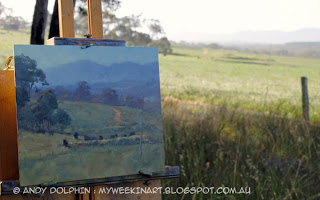 And here it is after I scraped back the ridges and painted over it in the studio. 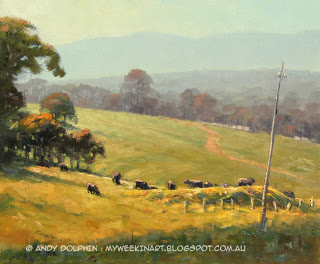 I feel the end result does a far better job of capturing the glowing atmospheric light that attracted me in the first place. I also reduced some of the mid-ground clutter by deleting what appeared to be a second dam behind the once where the cows are standing.

In both cases, the major change I wanted to make was to add more warmth. I prefer bright, warm paintings but it can be easy to lose vibrancy when you’re standing on the side of the road and painting quickly.

Both paintings were done – and re-done – using a three-colour palette.