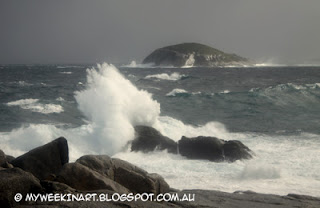 With severe weather forecast, I made the decision that I would head back to my favourite bit of Albany coastline this afternoon. I’ve seen it in the lead up to a storm before, but not during one.

I knew it wouldn’t be pretty but I packed my paints and easel up, just in case there was an opportunity for some plein air action.

The weather bureau don’t always get it right.

But they were right this time. All hell was breaking loose along the exposed sections of coastline. The spray from the breakers smashing against the rocks was non-stop and drenching – and the wind carried it long distances, like right across the car park, 100m away, and all over my car. And it wasn’t the usual coastal mist, this was like short bouts of heavy rain.

Here’s a plein air painting I did a week ago… 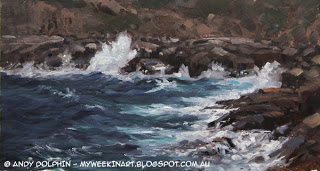 And here’s what that spot looked like today, from a slightly lower viewpoint… 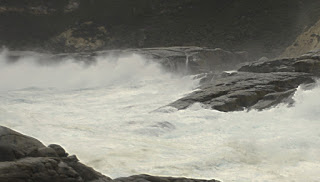 Painting was obviously off the menu today and I had to settle for photos and video. My poor camera was copping it and I had to keep wiping the lens on my jumper to get rid of the spray (I have a cheap UV filter on the lens for this very reason. Lenses are too expensive to mistreat. I probably should carry a lint-free cloth though.) 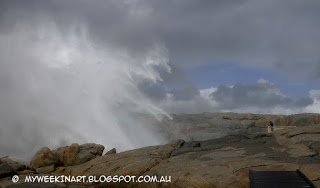 Can you see the person standing on the viewing platform in the photo above (click the pic for a bigger image)? This is a spot known as The Gap and the ocean is some 25m below the viewing platform. There’s a pretty scary amount of force behind that wave! And the wind at the platform was phenomenal.

Above is Cable Beach, a “sheltered” bay near The Gap. A few days ago the water was crystal clear, there were small fishing boats visible way out to sea and I was watching dolphins leisurely patrolling the shore at this very spot.  The only dolphin seen there today was me!

There’s a 100 tonne boulder on the beach, just out of shot. Apparently it washed up one day in a storm – a much bigger storm than today’s. 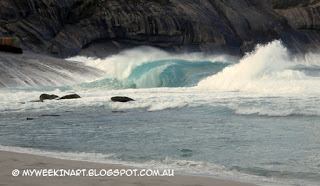 Above and below are photos of Salmon Holes, a deadly beach near the end of the Torndirrup Peninsula. People often stand on that sloping rock in the left foreground in the hopes of catching fish. Some never get to go home because, even on calm days, massive swells wash a long way up, along and back down it. My fish comes from a shop. 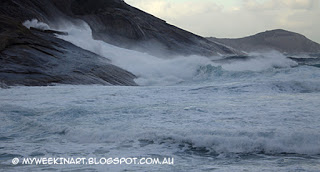 In all, I used up over 10Gb of my SD card this afternoon – over 400 photos and videos in just under four hours (although some are just blurry blobs because of the water-covered camera lens). I packed up when it got too dark. And did I mention it was cold? It was cold. My cheeks were burning from the chill. The things I do for this blog!

But I loved every minute of it. We’ll see if any paintings result from the effort.