Large parts of Australia have been hit with extreme weather this summer. Northern Queensland was hit by floods and then perhaps the largest cyclone on record. Meanwhile, northern and central WA and Victoria have also suffered exceptional flooding. You need to visualise the size of the Australian continent to grasp the area that’s been affected. It’s ridiculously huge.

Whilst we haven’t been personally affected by any of these events, this has been the weirdest summer we’ve had down south since leaving Perth over seven years ago. February is normally hot and dry, with temperatures in the forties not out of the question. This year, however, we’ve had the threat of a cyclone, though we’re nowhere near the tropics, and of a surprise storm that devastated some southern towns but never quite made it this far. What we have had is day after day of drizzle and rain, often with gusty winds. I think we’ve only seen clear skies for about four days this month.

With only one week left before autumn arrives, I’m hoping for some opportunities to get out and paint some summer sunlight. In the meantime, I’m managing the odd painting indoors. Here’s this week’s contribution…

This painting was based on a couple of plein air works I did last month. I took a little licence with the lighting since I have seen it turn warm on previous occasions. I kept the mountains simple as I wanted the white sand track to catch the viewer’s attention and for the large tree to stand out against an atmospheric backdrop.

Here are the two plein air studies I used as reference. 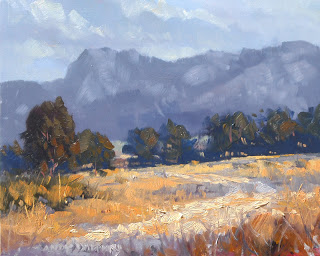 Summer track, Porongurup.
30x20cm oil on board.
© Andy  Dolphin
Share on FacebookShare on TwitterShare on Google+