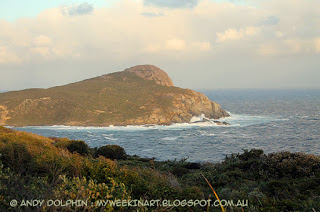 I had planned to go painting on Monday afternoon but got sidetracked, literally.

I visited Stony Hill, one of the highest points in Torndirrup National Park. The site offers magnificent views of two very different coastlines. On the left, looking north-west, are high, rugged cliffs exposed to the pounding surf of the Southern Ocean, while on the right lies the mostly-protected beaches of King George Sound and Princess Royal Harbour. The city of Albany can be seen in the distance. Isthmus Bay and Bald Head lie to the east while to the south is Peak Head – and this is where I get sidetracked.

The weather was pleasant with a slight breeze and good cloud cover. The temperature was just right for a walk. 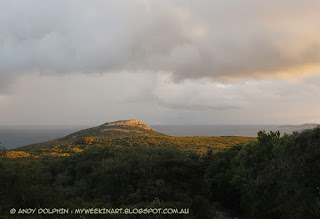 Peak Head is a granitic prominence that rises to over 100m above sea level. There is a 2.1km walk trail (4.2km return) that begins near Stony Hill, around 200m above sea level. The trail winds its way down the hill to a 25m high cliff overlooking a rocky bay, before turning uphill again to the final destination.

The uphill walk is pretty easy going until the trail disappears at the base of the granite dome of Peak Head. There’s a steep “climb” up a couple of granite slopes to reach the top. Here’s a photo taken half-way up one of the rock faces. 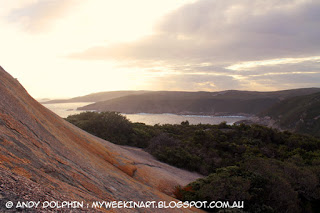 If you think you want to do this walk, wear non-slip walking boots! And take note of where the trail ends, so you can find it again later. 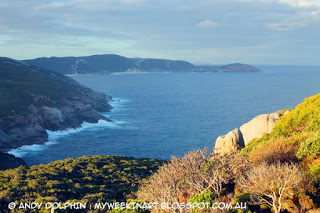 The return walk is a little more challenging as the steep downward slopes put serious pressure on ageing knees and the trail to Stony Hill is uphill all the way from the bay. Overall, it’s pretty straightforward for anyone with a moderate level of fitness and a couple of hours to spare. 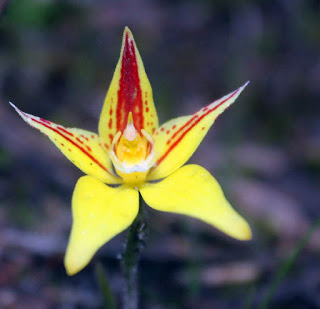